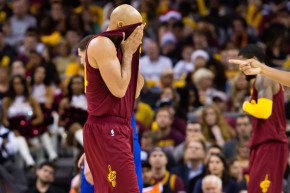 This redditor knows why the Warriors keep losing to the Cavs

On Christmas day, the Golden State Warriors and the Cleveland Cavaliers faced off for the first time since game seven of the 2017 NBA Finals. And it was fun! The Warriors built what appeared to be an insurmountable 14-point fourth quarter lead, only to see the Cavs come storming back for the win.

With 3.4 seconds left on the clock, Kyrie Irving burrowed his way to the rim, then swished a pretty, spinning, fadeaway jumper to put the Cavs up by one, 109-108. Ninety-five-year-old Richard Jefferson yammed all over Kevin Durant and Klay Thompson and got away with tripping and/or shoving Kevin Durant on the final possession. Just to keep this fine beef simmering, a local Cleveland paper decided to drop a meme below the headline for an Associated Press story.

Still, a meaningless – if highly-watched! – early season game says absolutely nothing about what might or might not happen should these two teams hook up again come June. But if you’re a Warriors fan, league-best record or not, there are some lingering issues. League-leading record or not, Steph Curry is still figuring out how and when to unleash his otherworldly shooting stroke now that Durant’s swiping more than a few possessions, The Warriors sacrificed quite a bit of depth to sign Durant and they’re desperately in need of someone to man the pivot, particularly if Andre Iguodala continues to show his age. (Iggy blew at least three transition attempts on Sunday, any one of which might have been enough to stave off the Cavs’ furious comeback.)

But one dude has a better theory, a more important theory, really, that explains everything: The Warriors represent all that is noble and good, a shining, selfless beacon of light in a sea of darkness.

The Cavs, however, are bad.

In a long-ass Reddit post titled, “My take on the “rivalry” between the Warriors and the Cavs,” canopyofmagic explains that the quasi-socialist, joy-fueled flower children in the Bay Area were no match for the “win-at-any-cost style” embodied by the Cavs, who, by dint of their evil essence, just mess with the Warriors minds, man.

Unfortunately, we don’t value the way Warriors have changed the NBA anywhere near as much as the black-and-white idea of winning. We allow all the records the Warriors broke last year, and the historic greatness of that team, to be invalidated by the idea that winning is the only thing that matters.

One notable record that the Warriors broke last year was for wins. They also shot and made the most three pointers in NBA history, which led to a great many wins. But go on.

I’m not here to argue a theory that winning isn’t everything. That’s way too ingrained in American society and capitalism to be worth the strokes of my keyboard.

And yet, keyboards must be stroked.

But what I will say is that the old, ruthless, hyper-masculine style of play is sometimes a poison to the new, team-based joy-centered style of play. The Cavs and the Warriors are less in a rivalry than they are in a struggle between two modes of being.

Draymond Green enjoys kicking dudes in the groin and either can’t or won’t stop. Steph Curry isn’t an adorable elf; he’s a straight killer. Canopyofmagic then complains that LeBron James unfairly works the refs, who let him get away with it because of James’ “political capital.” Just when you thought he’d delve into an extended rant about the NBA being “rigged,” he brings it all home.

My take is that (1) yes, they beat us fair and square to become the champions last year, (2) they did not do so by being better at basketball, but rather by maintaining a psychological edge over us which they still maintain today, (3) their psychological edge mostly comes down to the fact that our system is based on positivity, sharing, and having fun, and their system is based on a brutal drive to win at any cost, which acts like a poison to us.

Is he saying the Cavs are stealing the Warriors’ precious bodily fluids? After musing about pass-happy teams and whether said style originally belonged to the Spurs, yeah. I think he is.

(B)ut the essences of both teams are still as I described. And that psychs us out. The biggest effect of all is on Curry, who is the ultimate example of a joy-based player, and because of that, he lets the Cavs’ ruthlessness get into his head more than anyone. And when the Cavs take Curry out of the game psychologically, the match-up gets a lot closer.

TLDR; Cavs don’t have our skills, but maintain a psychological edge by being ruthless in the face of our unselfish, joy-centered way of playing, which takes the team’s heads – especially Curry’s – out of the game and allows the Cavs to maintain a small advantage.

Thus concludes the finest sports take in the terrible year of our Lord, 2016. We are truly blessed.