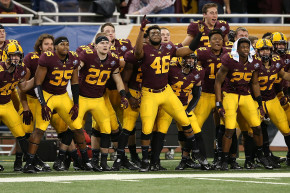 While the University of Minnesota's football team has backed down from its boycott, many players are still acting like idiots

On December 17, the University of Minnesota football team announced that it was ending its two-day-long boycott of the Holiday Bowl, relinquishing its demand that 10 players who had been suspended for an alleged sexual assault be reinstated. But according to the Associated Press, the players contemplated going ahead with the walkout a day later because they didn’t like the tone of President Eric Kaler’s remarks at a press conference.

Listening from another room in the team’s football building, players fumed. They thought Kaler was taking credit for solving an impasse even though he left the talks the previous night without a deal, a group of four that included players and other people involved in the talks told The Associated Press.

Players, angered by Kaler’s remarks, called an emergency meeting the next day as they returned to practice after some pushed to reinstate the boycott.

In September, four players, KiAnte Hardin, Ray Buford, Dior Johnson, and Tamarion Johnson, were suspended for an unspecified violation of team rules. No other information was provided beyond the fact that they were being investigated by the Minneapolis Police Department.

Reports soon surfaced that a 22-year old student was claiming that she had been sexually assaulted by multiple members of the football team on September 2, and had reported the alleged crime to the police the next day. A month later, the charges were dropped with county prosecutors citing “insufficient admissible evidence,” and the players returned to the team.

As mandated by federal law, the University of Minnesota’s Office of Equal Opportunity and Affirmative Action had begun its own Title IX investigation, the results of which prompted the school to suspend an additional five players for the Holiday Bowl: Antoine Winfield Jr., Seth Green, Mark Williams, Kobe McCrary, and Antonio Shenault, with additional recommendations of expulsions and probation, depending on the level of alleged participation. The investigation can be read in its entirety here. (Warning: it’s brutal and graphic, and for some reason, the University was able to get its hands on a great deal more evidence than the police.)

As Kevin Trahan noted at VICE Sports, the team fundamentally misunderstood the meaning of due process, the standards of proof required by Title IX, and they blamed the University for naming the players with “reckless disregard” when no such thing occurred. And despite resuming football activities, they’re still laboring under the delusion that their threatened walkout added anything to the ongoing question of how universities should deal with sexual assault cases.

But before the decision was made to suit up and play ball, they stayed up all night pleading with Athletic Director Mark Coyle and Kaler. By 9 pm, Coyle and Kaler had left, and the players brought in school officials whom they thought might be more amenable to their demands. Two members of the board of regents who had taken issue with the school’s affirmative consent policy, Darrin Rosha and Michael Hsu, ended up talking with them until 6 am. Even so, the University wasn’t going to budge.

“We weren’t negotiating” Hsu said. We had nothing to give them. We were only there to talk to them, help understand them, help them understand us, the university, us as regents. Help them think through the ramifications.”

Here are some of the ramifications they worried about, according to the Associated Press:

If they pulled out of the bowl game, would they look like they were defending sexual assault?

Would the coaching staff lose their jobs?

Probably not, but there is a MoveOn.org petition demanding head coach Tracy Claeys’ head out there that will accomplish nothing.

They talked about their legacies. Carrying through with the boycott would have made them the first team in college football history to pull out of a bowl game under protest. Did they want to be known for that?

If the cause is just, sure. This one isn’t.