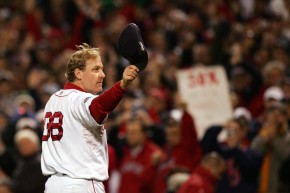 Retweets, it’s often said, are not endorsements—although that qualifier tends to go out the window when you quote a tweet and add the words, “Ok so much awesome here.”

Those five words, typed by former six-time All-Star pitcher Curt Schilling, now may ultimately doom his chance at Hall of Fame enshrinement. His candidacy, which already was often described as “borderline,” appears to have suffered since Schilling shared a photo of a man wearing a t-shirt that said, “Rope. Tree. Journalist. Some assembly required.” (That tweet has since been deleted but was preserved in the below screenshot.)

Schilling is no stranger to incendiary rhetoric—he wished death upon Hillary Clinton, offered bigoted thoughts about transgender people, shared racist iconography like the Confederate flag, and so much more—but this one directly targeted the enfranchised writers whose votes would determine his Hall fate.

The Hall of Fame ballot tracker run by Ryan Thibodaux indicates that, through the first 96 disclosed ballots as of Dec. 23, Schilling is running at a net deficit of minus-8 votes. That’s a potentially crippling loss of 8.3 percent on his way to the necessary 75 percent threshold for election. Two years ago, he polled at 39.2 percent before jumping to 52.3 last year.

ESPN’s Jerry Crasnick surveyed 50 Hall voters and found that Schilling’s journalist-lynching tweet played a role. Boston Globe columnist Dan Shaughnessy, who received the Hall of Fame’s 2016 Spink Award “for meritorious contributions to baseball writing,” told ESPN: “Schill was comfortable retweeting a despicable tweet promoting lynching of journalists. That is not a political issue. I’m sure he wasn’t serious, but it’s dangerous to promote that kind of rhetoric in today’s America. So I’m taking a year off from Schill—thank you very much.”

“To me, this falls under Rule 5 of the [Baseball Writers Association of America] rules for election, specifically the reference to integrity and character,” Kirby Arnold, a longtime Seattle writer, told Crasnick. “I was prepared to vote for Curt again this year but changed my mind after his Twitter comment. Whether or not he meant it as sarcasm didn’t matter to me. I was disgusted by the fact someone would either endorse the act of lynching or make light of it, and it didn’t matter to me if it was journalists or any living being.”

Ah, yes, the ambiguous Rule 5, which states in full, “Voting shall be based upon the player’s record, playing ability, integrity, sportsmanship, character, and contributions to the team(s) on which the player played.” That’s what many voters have used to keep steroid-tainted superstars like Barry Bonds and Roger Clemens off their ballots for so long. Their numbers, taken at face value, leave no doubt about their worth, but they’ve instead risen from 36 or 37 percent to 44 or 45 percent, and that trend appears to be accelerating—they’ve each gained at least 10 votes in the early tracking.

Schilling’s baseball merits are, without diving too deeply in the weeds, sufficiently polarizing on their own. His volume stats like 216 wins (85th in MLB history) and 3,261 innings (97th) are sub-par but rate stats like his 4.4 strikeout-to-walk ratio (3rd) and adjusted ERA+ (46th) are better, as is his tremendous postseason track record: a 2.23 ERA, for instance, which ranks fourth among pitchers with at least 10 playoff starts.

Longtime Yankees beat writer for the New York Daily News, Mark Feinsand, wrote in an email to Vocativ that he did not vote for Schilling this year, explaining, “He was one of my final cuts, and while his recent comments/tweets/etc were not the primary reason I left him off, they certainly didn’t help his case when it came to the final spot on my ballot.

“There is a good chance that I will vote for him in the future, but with so many deserving candidates this year (including some nearing their final years of eligibility), I chose to leave him off. I believe his career is Hall-worthy, but I left about a half-dozen players off my ballot that I believe are deserving. Perhaps Schilling’s latest nonsense resulted in him being put in the ‘penalty box’ this year, though I likely would have come to the same decision with my ballot had none of it ever happened.”

Feinsand raises a very reasonable and appropriate point: the Hall’s restriction that voters can only select 10 candidates per year has created a logjam on the ballot with, many believe, more qualified candidates than eligible votes. Schilling’s inflammatory remarks may cost him a few votes—perhaps some writers used “not suggesting the lynching of journalists” as the tie-breaking stat when choosing between two candidates. As Feinsand notes, however, Schilling could be added (or restored) to ballots in the future when there’s less competition.

Schilling also has tried defending himself, writing in an email to Crasnick that his lynching tweet was “100 percent sarcasm.”

“Every single person that read it KNEW I was mocking,” Schilling said. “Do I have some sort of hidden passion for lynching in my past?”

Some have been willing to overlook his words. Boston Herald columnist Steve Buckley, for one, denounced Schilling’s commentary but cast his ballot for his baseball performance.

“As a journalist, as a member of the LGBT community, I say this to you, Curt Schilling: Go somewhere else to sell your hateful, juvenile drivel,” Buckley wrote. “I’m not buying. But you belong in the Hall of Fame.”

Former ESPN Yankees beat writer Wally Matthews, who stopped voting for the Hall, wrote that the quantification of Schilling’s character “would be a negative number.” Matthews cited the lynching tweet and wrote, “Beyond the offensiveness of any reference to lynching, which is profoundly racist in itself, is the threat to the men and women in my profession. That is something I take personally and if Curt Schilling really wants to ‘lynch’ journalists, he can start with me, in a boxing ring with 10-ounce gloves on. That will put an end to his sick little fantasy.”

Longtime national writer Jon Heyman, who currently works for FanRagSports, has voted for Schilling in the past but spoke about the lynching tweet to Boston’s 98.5 FM The Sports Hub.

“There is a line there to me and he crossed that line by espousing lynching,” Heyman said. He did many things before that, and many of those things got him fired at ESPN. I was willing to ignore all of those things, but I can’t imagine why anyone would espouse lynching. I don’t know what he believes. I saw him with some hateful rhetoric on TV and then he went and added this to it. If you think that’s a joke, it’s not a very good joke and it seems to line up with things he espouses.”

Schilling, of course, has taken all this commentary exactly as you’d expect.

“The Hall of Fame vote, to people like Dan [Shaughnessy] and Wallace Matthews and Jon Heyman, is power to them,” Schilling told ESPN.com. “That’s how it works when you give weak people power. They want to ‘hold it over me’ or something like that? Please. An arbitrary process done by some of the most vindictive and spiteful humans I’ve ever known? One I stopped having control over nine years ago?

“I sleep fine. My three World Series rings, trophies and 20-some years of amazing memories are all mine, and always will be.”

Apparently not satisfied with those attacks, Schilling took to his blog for further antagonizing, calling several writers out by name, listing a bunch of heinous crimes he has not committed (um, ok), and referring to himself only as a “smart ass, jokester.”

Hall of Fame voting is an amorphous process to begin with, no set milestones or credentials that one can check to guarantee admission and fairly vague criteria like integrity and character as a guide. The only certainty is this: Schilling has done himself no favors, once again.