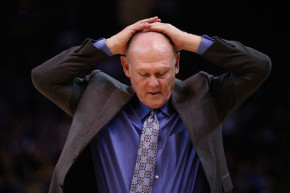 Former NBA head coach George Karl has gone and written a book called “Furious George.” The title is a delightful nod to the beloved, long-running children’s series, except angrier, and the nice Man in the Yellow Hat never shows up. The New York Post got a hold of a review copy and laid bare a few of the juiciest tidbits.

Karl calls the core of his Denver Nuggets squad, Carmelo Anthony, J.R. Smith, and Kenyon Martin, “AAU babies” and “spoiled brats.” Carmelo Anthony is a “user,” who didn’t try hard on defense, everyone wanted more shots, blah, blah, blah. If these durned kids had gotten off Karl’s lawn and maybe pulled their pants up, they might have gotten out of the first round once during his seven and a half seasons in charge.

But the dude’s got residuals to earn, so he felt the need to throw in some lousy pop psychology to boot. The real cause of all the selfish, bad basketball-ing is dads, or rather, the lack thereof.

Karl wrote Anthony and Martin not having fathers in their lives became a detriment to their personalities.

“Kenyon and Carmelo carried two big burdens: all that money and no father to show them how to act like a man,” Karl wrote.

The quotes above were summarized by the Post. The full flower of his thoughts, reveal that, yes, the paragraph in question is even more condescending and an unmistakable dog-whistle.

Even for the players that had a dad, you needed to have the right kind.

Regarding Smith, Karl wrote that Smith’s father, Earl Sr., “urged his son to shoot the ball and keep shooting it from the very moment I put him in the game.”

Counterpoint: Read Jonathan Abrams’ Grantland story about the role J.R. Smith’s father played in his life, or watch Smith break down in tears during a Father’s Day post-game presser following Game 7 of the 2016 Finals.

“I mean, my parents, my family — that’s the biggest inspiration in my life. I’ve been in a lot of dark spots in my life, and if it wasn’t for them, I wouldn’t be able to get out of them. But they are who they are. They followed me. They yelled at me, they screamed at me. They loved me. They hugged me. They cried with me. They always stuck by my side, no matter right or wrong. And I know a lot of people don’t have their parents in their life — their mother or their father — but, I got the best two.”

“I just hope that he finds happiness in what he’s doing. His book, hopefully, will bring him happiness,” he said. “The truth of the matter is everybody else is kind of speaking up for me from their own experience. So I really don’t have to speak on it.”

That they are. Smith chimed in Thursday afternoon.

As did Wilson Chandler.

George Karl came out with a confessions of a video vixen book smh.

But those tweets scan as rather subdued compared to the onslaught unleashed by Martin.

The Nerve of an AWFUL AND COWARD ASS COACH. More to come

I didn't have a father going up. We all know that. What's George Karl excuse for being a terrible person

Having a lot of wins doesn't make you a good coach. He was blessed with great talent

Well, that’s a lot to… Oh wait. He wasn’t finished.

Since we were so bad as players. Tell him to forfeit those Denver wins

George Karl is selfish,unhappy,missable,,cowardly person. No wonder he's be fired every place he has coached

Talking bout Melo didn't like defense. Hell he never coached defense. How does that work

It’s worth recalling that many an NBA player Karl coached ended up so loathing him that they were fine going public with their feelings. Since he’ll never snag another NBA head coaching gig in his life, he’s going to burn whatever bridges he’s got left in exchange for selling some books.

But just for the hell of it, let’s take Karl’s (dumb, reductive) assertion at face value. If these players were so desperate for a father figure, maybe Karl should consider that the onus was on him to act like one, instead of the divorced, bitter dad that everyone’s scared to talk to during a holiday party and regrets inviting at all.

Please do not buy a copy of “Furious George,” which will be available for purchase in January.