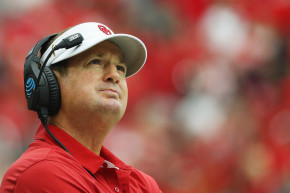 Why Is Joe Mixon Still Playing For Oklahoma?
By Robert Silverman

Why Is Joe Mixon Still Playing For Oklahoma?

A Bob Stoops press conference raised the question, but left it unanswered

Two and a half years after University of Oklahoma running back Joe Mixon brutally struck a fellow student in the face, an assault that left the female victim with four fractured bones, head coach Bob Stoops has come to the conclusion that the year-long suspension the school handed down wasn’t close to enough.

In a press conference on Wednesday, Stoops said that had the attack taken place now he would have dismissed Mixon from the program.

“Dismissal is really the only thing that is possible, he said. “Hopefully that message goes down even to the high school level that these things are just unacceptable to any degree and there’s no recovering. A young guy having an opportunity to rehabilitate and to have some kind of discipline and come back from it is really not there anymore… I guess … it never has been acceptable. What I’m saying is, there’s no recovering from these incidents really anymore.”

Stoops didn’t specify exactly how the world had become such a radically different place since 2014, save for the suggestion that things have “changed.” He also did not enjoy watching the surveillance video shortly after Mixon’s arrest.

“It was horrible,” Stoops said. “I hated it. I hated it as much as anybody did, absolutely.”

To his credit, Stoops does seem to understand that the light suspension makes it seem as if he and the University don’t really care about violence against women, particularly when it comes to football players.

“To some degree it does, and I regret that,” Stoops said, though he continued to assert that the initial suspension was more than enough. “In the end, at the time, we felt it was a significant and strong punishment.” Further, he remained steadfast in his belief that keeping Mixon on the team and imposing the team’s own strictures, including monitoring his grades and having him undergo various counseling sessions, would be best for Mixon in the long run.

As to the suggestion that Mixon’s football gifts played any part in the decision-making process, Stoops is aware that critics might perceive it that way. In response, he downplayed the success rate of his recruits.

“Let’s remember that he had not played a down here when this all occurred,” he said. “We’ve had plenty of four- and five-star guys not amount to a whole lot here through the years.”

There’s a bunch of talk about redemption and opportunities for growth, but regardless, the “changes” he’s pointing to aren’t so much about mounting public outrage, but rather that people need to see filmed proof of an assault by an athlete before there’s any response. And the suspensions – whether levied by a school or a professional league – are as much about damage control and PR as they are concern for anyone’s long-term well being, like permitting an individual who has been shown capable of this kind of brutality to remain on campus.

Stoops also said that he’d wished the video had been made public at the time. Why? If the tape had made the rounds, that would that have forced his hand, as was the case when filmed evidence led Florida State to cut hotshot quarterback D’Andre Johnson. (Johnson has since transferred to Florida Atlantic University.)

Then there are the questions that were not asked. Stoops failed to address the harassment of the victim in this case, a nasty repetition of a hateful practice that occurs whenever an athlete is accused of violence against women. As a matter of course, a decent-sized chunk of wrong-headed diehards will blame the accuser, bombard her public social media accounts, dig through her past, and do everything in their power to make her life miserable, while coming up with half-baked conspiracy theories and misogynistic rationalizations to justify their actions.

Finally, no one bothered to pose this question to Stoops: If, as he now claims, Mixon’s actions were unacceptable and should have resulted in a dismissal, then at a minimum he could back up those words and keep him sidelined during the Sugar Bowl on January 2. If not, all his talk about his regrets scans as empty.

So, Bob Stoops, if you mean what you say, why is Joe Mixon is still playing for Oklahoma?

The press conference can be seen in its entirety here.