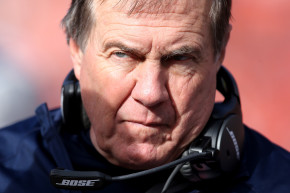 During Bill Belichick’s regular Wednesday presser, he was asked about Michael Floyd, the team’s team’s newly-claimed wide receiver. Floyd was arrested early on the morning of December 12 when the Scottsdale police found him unconscious, slumped over the wheel in an unmoving car. He was then promptly released by the Arizona Cardinals.

Via Patriots.com, Belichick said, “Yeah, we were aware of his situation when we claimed him.” When asked if he’d gotten a glimpse of two videos, published yesterday by TMZ, showing a clearly inebriated Floyd barely able to respond to the officer’s questions or recall how much he might have consumed, Belichick stonewalled in a very Bill Belichick-ian way.

There’s a momentary pause where he noticeably stiffens and you can almost sense a stifled desire to unload on the reporter, before he decides to go with the equivalent of “We’re on to Cincinnati.”

“We were aware of the situation before we claimed him,” Belichick says, declining to state whether or not he’s been clicking through TMZ videos. (He hasn’t.) “He’s in an ongoing legal situation that I’m not going to comment on.”

This afternoon, the Arizona Republic reported that Floyd’s blood alcohol content checked in at .217, nearly three times the legal limit of 0.08. As such, he’ll now be charged with a “Super Extreme DUI,” according to Arizona law.

Meaning, if convicted he’ll have to use an Ignition Interlock Device, a breathalyzer attached to the car’s ignition that ensures his BAC is below the legal limit, for 18 months. He would also serve a minimum of 45 days in jail, as opposed to 30 for an “Extreme DUI,” and pay a fine of up to $2,500, not including any additional court fees. Floyd also was charged with drunken driving during his senior year at Notre Dame, which may impact how prosecutors pursue the case.

The Patriots are 12-2 and will pants the New York Jets on Sunday. It is unclear how many snaps Floyd will receive, not like it’ll make much difference one way or another, given that he still hasn’t practiced with the team and is having a terrible, injury-laden season.

Anyway, here’s a video edited to make it seem as if Belichick is belting out the world’s least cheery version of “Have Yourself A Merry Little Christmas.”

Belichick was shown this clip during the presser and revealed that he did not go caroling, which is more than he had to say about Michael Floyd.