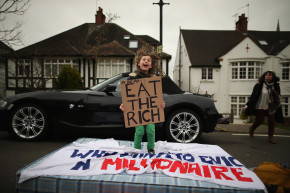 Another day, another stadium scam

Eric Greitens, Missouri’s Republican governor-elect, did the right thing on Tuesday. A consortium of wealthy gents are seeking millions in tax breaks and public monies to build a stadium for St. Louis’ possible expansion Major League Soccer franchise. Geitens, to his credit, told them to fuck off.

“This project is nothing more than welfare for millionaires,” Greitens said in a statement. “Right now, because of reckless spending by career politicians, we can’t even afford the core functions of government, let alone spend millions on soccer stadiums…This back-room wheeling and dealing is exactly what frustrates Missourians.”

He’s not wrong. Missouri’s economy remains in the tank; the state consistently ranks well below average when it comes to K-12 education; and both Kansas City and St. Louis are amongst the most segregated cities in America. Giving in to the demands of sports owners crying poverty shouldn’t top his political agenda and is definitely a frustrating thing, if only because it keeps happening time and time again. Not that Greitens’ proposed policies will actually solve Missouri’s problems, mind you. He wants to pass union-killing “Right to Work” legislation that’s terrible for actual workers, and, like the mango-colored, petulant ogre set to ascend to the presidency, refused to release his tax returns while receiving millions in campaign contributions from unknown sources.

But Governor-elect Greitens’ strong language has the SC STL ownership group worried enough that it successfully requested Missouri Development Finance delay the vote to approve the funding while they go hunting around for other governmental entities that might pony up the dough. A quick side note: the $40 million dollars worth of “state tax credits” that Greitens balked at doesn’t include the $80 million SC STL wants to snag from the city of St. Louis via a sales tax increase proposed by Mayor Francis Slay.

Then there’s an additional $9 million that the Department of Transportation would dole out in order to make the proposed site stadium ready. In total, that’s $129 million dollars paid out by the public. (The SC STL group keeps insisting that private sources will spend $405 million dollars when all is said and done, but they only arrive at that sum by adding the $200 million-dollar expansion fee charged by MLS to the bottom line, somehow.)

And yet, Jim Kavanaugh, vice chairman of SC STL and CEO of a tech company that pulls in $9 billion in revenue per year, is just a regular guy who cares, according to Kavanaugh.

“Personally, growing up from a father who was a brick layer, I don’t come from money and any money I’ve made I’d say it has been earned,” Kavanaugh said by phone. “There’s a lot that personally speaking for myself and my partners we have given back in a number of ways and still plan on doing that in the community here.”

One thing he and his partners don’t want to give back: their own money.