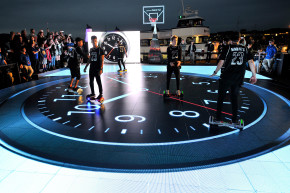 “I am honored because when I am dead and gone they’re going to have a rule named after me, so I feel good,” Barkley once said.

And so on, with more coming. Basketball Insiders reviewed a copy of the new collective bargaining agreement’s proposed changes, which will reportedly include some off-court prohibitions: “now including fireworks, firearms, jet skiing, hoverboards, trampoline jumping, etc.”

The inclusion of hoverboards will—or at least should—be christened the J.R. Smith Statute. Let us wistfully harken back to simpler times, in 2015, which was before the Warriors blew a 3-1 lead to the Cavaliers (people forget that). Here was Smith entering and exiting the arena, apparently even with a Coors Light in hand.

J.R. Smith gliding through the hallways of Quicken Loans Arena with a Coors Light in hand and his feet on his hovercraft. Gotta love J.R.

By the following season, the Cavaliers reportedly had banned hoverboards from Quicken Loans Arena, which was probably smart because multi-million-dollar investments could easily get hurt. Those boards could easily tip over, and they’re prone to bursting into flames. They’re not even allowed to be carried on a New York City subway train.

Smith accordingly adjusted his transportation gadget game, progressing to the Scoot-E-Bike. Even though those are “not intended to be operated in wet or on rainy days,” the manufacturer says, which suggests they aren’t all that safe and sturdy either.

Similarly, barring NBA players from trampolines may well be the Rajon Rondo Rule after the so-called Trampoline-Gate incident of 2014, when he broke his hand around the same time he visited a trampoline park—although he was adamant that the injury occurred later, after slipping in the shower.

While we’re at it, the fireworks ban no doubt is borrowed from the NFL’s Jason Pierre-Paul. The jet ski rule could be a nod to Tristan Thompson, who was seen cruising around with Khloe Kardashian on one last summer.

Perhaps the league might be more lenient if players followed the lead of Michael Jordan—and wore a helmet.

Michael Jordan — I Jet Ski, Bro But Get Me a Helmet!!! #TMZTV https://t.co/TXrN4lMAyb

The firearms restriction might as well be the Gilbert Arenas Rule after he brought guns into the Wizards’ locker room. (Incidentally, there’s already a Gilbert Arenas Provision, which sought to help franchises keep young restricted free agents.)

It’s not surprising that the NBA would want to protect its investments, especially as the money in the game rises dramatically with the latest media deal. But Smith now has one fewer avenue to show his endearing, playful side. Roll sweetly into the night, J.R.