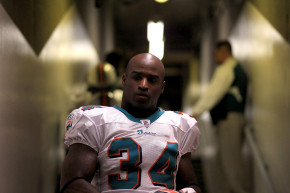 Ricky Williams Got Scammed Out Of Millions
By Robert Silverman

Ricky Williams Got Scammed Out Of Millions

Meet Peggy Ann Fulford, a not-so-nice 58-year-old woman from New Orleans now under arrest for pretending to be a financial advisor and money manager. Why? So she could con former NFL running back Ricky Williams out of millions of dollars, according to the New Orleans Times-Picayune.

The indictment, which was made public following Friday’s arrest, details Fulford’s gaudy, false resume. She claimed to hold degrees from both Harvard Business School and Harvard Law School, had earned millions in various real estate deals, some of which involved flipping hospitals, and had made a killing on Wall Street. Even better, she offered her services for free, a deal that was too good for Williams and three other unnamed athletes to pass up.

Fulford offered to manage the players’ finances, including paying their bills and income tax payments, without charging a fee because she already was independently wealthy and “just wanted to protect them” from losing their money, according to the indictment.

Federal investigators said Fulford diverted millions of dollars from Williams and the other victims, laundering the money through dozens of bank accounts and spending it on her own personal expenses, including luxury cars, real estate, jewelry and airline tickets.

Fulford also used a slew of aliases, according to the FBI. For the most part, she stuck with her given first name, calling herself Peggy King, Peggy Williams, Peggy Simpson, Peggy Rivers, and/or Peggy Barard, but she also went with Devon Cole and Devon Barard.

Speaking of Peggy King, as the Times-Picayune notes, in April 2015 Dennis Rodman fired his financial manager, one Peggy King, calling her a fraud and a thief, who, in a lesser offense, claimed to have attended Harvard. Rodman’s lawyer told the New York Post that just as was the case with Williams, Fulford allegedly spent his money to purchase high-end luxury items and real estate for herself, though he did not specify if Rodman is one of the three other unnamed athletes in the indictment.

Fulford has been charged with wire fraud, mail fraud, interstate transportation of stolen property, and money laundering. In a lawsuit filed in 2013, Williams claims she made off with $6 million dollars. Damn.