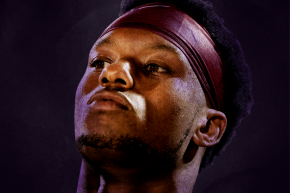 The tape's release is far from the end of this story

The surveillance video showing Joe Mixon viciously assaulting Amelia Molitor inside Pickleman’s Gourmet Cafe in the early hours of July 25, 2014 was something neither party involved wanted the public to see.

Mixon—then a highly touted high school prospect, now a potential first-round NFL draft pick—stood to lose his football career if the video sparked the same outrage that Ray Rice’s video did. In the immediate aftermath of the assault, Molitor was harassed by Sooners fans to the point of deleting all her social media accounts and quitting her job at a bar and grill just off the campus of the University of Oklahoma. Releasing the tape would trigger another round of trauma, or worse.

However, the release of the video became seemingly inevitable when the Oklahoma Supreme Court ruled on Dec. 6 in favor of the Oklahoma Association of Broadcasters (OAB) that the video was a public record subject to the Open Records Act, all but ending a more than two-year legal battle between the media (in the form of the OAB) and the City of Norman, its police department, and Cleveland County over the legal status of the tape.

The city had argued that because Mixon voluntarily surrendered himself after the incident instead of being arrested by an officer, the video was not “cause for his arrest” and thus exempt from being considered a public record. The state’s Supreme Court ultimately disagreed. The city had a 20-day window to request a rehearing, and as of the morning of Dec. 16, everyone was waiting to see if the city would request a rehearing or capitulate to the Supreme Court’s ruling by releasing the tape to the OAB.

Then, out of nowhere, during the late afternoon of Dec. 16, Joe Mixon himself, who was not party to any of the lawsuits about the tape or even known to have had a copy of the tape, sent a letter and a DVD of two videos of the assault to the Oklahoma Association of Broadcasters.

“We were surprised by the release of the video by Mr. Mixon’s attorneys,” said Doug Dodd, legal council to the OAB. “This was the first time we had heard from him or his attorneys since we filed the first Oklahoma Open Records lawsuit on behalf of the Oklahoma Association of Broadcaster in November 2014.”

It’s a bold move for a 20-year-old football star to release a video of himself punching a woman while a court battle over the legal status of said videotape is raging on, not to mention that he does so over the legal objections of the woman he punched, who after the Dec. 6 ruling filed a motion to intervene in the OAB’s case against the city on the grounds of her right to privacy. Among those who’d followed the case closely were more than a few dropped jaws.

While the letter Mixon’s attorney Blake Johnson sent along with the video suggests a more coordinated release that was made in consultation with the city—and the city having no objections to the release was possibly a tacit admission that it didn’t plan to file for a rehearing in the OAB case anyway—perhaps the most bizarre development in the release is that it appears to have been done not only with the blessing of Molitor, but in collusion with her, at least in part.

In Johnson’s letter, he mentioned the motion Molitor filed to intervene in the OAB case and said Mixon’s side consulted with Molitor because of it. Molitor, who still has an outstanding civil suit against Mixon in federal court, actually gave Mixon the video, and did so “recently,” according to Johnson.

“They [Molitor and her attorneys] said they [the tapes] need not be maintained as confidential,” Johnson said in the letter. “Considering those facts, together with the Oklahoma Supreme Court’s strongly-worded [sic] opinion, we concluded that OAB still would ultimately obtain the video it has been requesting.”

That Mixon and Molitor colluded to release the video themselves despite no court directive suggests that they believed that in light of the Dec. 6 ruling, it was better for them to release the video sooner than later, and doing so late on Friday is a classic public relations strategy of dumping bad news at the very end of a work week to minimize the impact.

For Mixon, this makes perfect sense. Had he waited for the city’s 20-day window to request a rehearing expire, the tape likely would have come out just a few days before Oklahoma’s bowl game on Jan. 2 and such timing would have made it an even bigger story. Further, Mixon likely wants to put as much time between the release of the video and the NFL Draft as possible, assuming he decides to leave school early.

For Molitor, the motive is unclear. One of Molitor’s attorneys complained to The Oklahoman that Mixon released the tape the day of Molitor’s graduation from OU, suggesting that maybe the two sides weren’t exactly on the same page. Calls to Molitor’s attorney for clarification were not returned.

But the sad reality is that women who are abused by star athletes always end up being abused by fans of that athlete as well, not to mention the fact that the legal tug-of-war over the Mixon tape didn’t seem to pay much mind to how it would effect Molitor. In addition to having her jaw wired shut for months and suffering multiple broken bones in her face, Molitor had to face friends and classmates on campus who blamed her for the incident and for jeopardizing the eligibility of a potential star running back. The release of the video will undoubtedly cause those problems to resurface.

“We see time and time again in the media when videos of assault and domestic violence surface, there often is a lot of public backlash,” said Rachel Goldsmith of Safe Horizon, an organization that assists victims of domestic violence and sexual assault. “People make a lot of comments that blame victims of crime for these incidents. Often times, victims are re-traumatized for having these images in the media when really most victims are just looking to heal and move forward with their lives. They didn’t ask to be victims.”