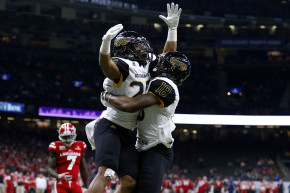 Celebration Bowl Lost Due To Celebration
By Joe Lemire

What kind of idiot thinks celebrating is allowed at the Celebration Bowl?

Amidst the morass of unremarkable college football bowl subdivision games, the Celebration Bowl wasn’t even one of them.

With 80 of the NCAA’s 128 Bowl Subdivision schools (i.e. 62.5 percent) selected for one bowl or another—20 teams, i.e. a quarter of the slate, didn’t have a winning record—there are some real duds on the docket.

The Celebration Bowl, meanwhile, flew below that radar even though it was actually more interesting than most. Although it pitted a pair of league champs from the lower division (Football Championship Subdivision in the NCAA’s stodgy parlance), they were the two best Historically Black College and Universities. Grambling State won the Southwestern Athletic Conference at 11-1 while N.C. Central won the Mid-Eastern Athletic Conference at 9-2, yet its defining moment was this: N.C. Central lost the Celebration Bowl because of a celebration penalty.

Facing third-and-12 with a scant 2:25 to play, N.C. Central completed a 39-yard touchdown pass that should have tied the score. Instead, receiver Quentin Atkinson—who avenged an early-game dropped TD to make the most important catch of his college football career—dared to remove his helmet while in the vicinity of the endzone. This earned him a 15-yard excessive celebration penalty.

Grambling blocked the ensuing, much-longer extra-point attempt, no doubt a direct result of the penalty, given that longer kicks require a lower exit angle to cover the necessary distance and blah blah physics blah blah. Grambling then won the game, 10-9.

3rd and 12. Need a play. Aaaand it didn't matter because the PAT was blocked. Still a great play. #CelebrationBowl pic.twitter.com/SwFETtnXbH

Mind you, Atkinson was already out of bounds while jumping up and down with his similarly enthused teammates. It was a great play and a great moment that deserved great joy. Instead, a totally asinine rule intervened and cost N.C. Central the game, because rules.

All of this seems to ignore the fact that these bowl games are supposed to be a reward for the players. It’s hard to imagine that most of the mid-December contests are drawing any kind of appreciable TV ratings as it is, so some rebranding would serve them well.

The Celebration Bowl should actively encourage excessive celebration. I, for one, would watch have much more interest in that game if I knew there’d be choreographed TD dances.

Who would that offend? No one’s watching anyway.