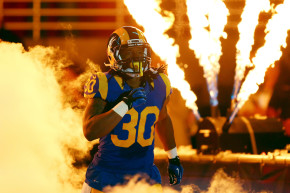 Todd Gurley Gets Roasted By Rude Teen
By Robert Silverman

Todd Gurley, the 2015 NFL Offensive Rookie of the Year, has had a less-than successful sophomore campaign, which has lead to beef with rando fantasy football devotees on Twitter.

It’s not entirely his fault, as Gurley himself said, since the Los Angeles Rams have been running what “looked like a middle school offense.” Still, middle schoolers can be pretty darned effective, what with all those hormones jangling around and such.

“We’re just going through the motions,” Gurley said. “It looks like everybody’s just playing to get through.”

One way might be to ditch social media for a while. Gurley was selected in the first round in most fantasy football drafts, but he’s ranked 21st amongst running backs in a standard-scoring league, and people are getting snippy. Like this fella.

Naturally, Gurley told Keith to meet him in Temecula.

But one should never get Mad Online. It’s a category one mistake by Gurley, which allowed Keith to drop a pretty savage burn.

Been waiting on you in the end zone. Where you at? https://t.co/LoeqGavYDJ