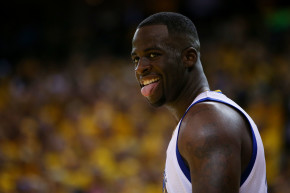 Money Green Wants More Of It For His Teammates

The early reviews of the recently agreed-upon NBA collective bargaining agreement are that it’s quite friendly to superstars. The Warriors’ Stephen Curry, for instance, could sign a five-year, $207-million contract—the richest in history by some $50 million—when he becomes a free agent this summer.

Curry’s teammate Draymond Green, however, believes the new CBA is a disappointment for the lower-tier players. He began with these cryptic tweets on Wednesday.

Stand for something… or fall for anything

One day we will get it right…. maybe

On Thursday, he explained himself further in an interview with reporters. Green, who is in the midst of his own five-year, $85-million deal, emphatically clarified that he is not seeking anything more for himself—“If I can’t live the rest of my life off my contract, that’s my fault,” said the man whose nickname is “Money”—but, rather, for his end-of-the-bench teammates.

“I’m not [pleased]. For several reasons,” Green said, according to a transcript provided by the Mercury News. “It’s not about me. I am by no means mad about my salary. I’m blessed. I get to play the game I love for a living and make a lot of money doing it. . . .

Indeed, provisions were put in place to allow each team to sign two superstars to what’s called a Designated Player Exception—a fancy term that basically equates to lavishing super-mega riches on homegrown players. Rookie and other minimum contracts are expected to grow by about 45 percent; the current minimum salary, $543,471, would rise to $788,033, for instance. In addition to raising the floor on salaries, the NBA is adding an extra guaranteed roster spot, going up from 13 to 14.

Green said he’d advocate for an as-yet-unexplained “different structure” to give lower-tier players even more. His motivation, he said, is that he has “the mindset of a mid-level guy or a minimum guy.” After all, he is the rare second-round pick to become a star; he made less than $1 million in each of his first three seasons—before cashing in with his nearly nine-figure extension.

“It’s not about us, it’s more so about the guys who aren’t on that level. When I look at my career, I didn’t expect to be at this level I’m at now. I kind of identify with those guys who haven’t made it to the level I’ve been fortunate enough to make it to. So when I think of contract negotiations in the CBA, I think about them, how can we help them. How can we help the guys who aren’t making as much make more?”

While increasing the minimum salary and the number of players who receive said salary is all well and good, Green’s got a point about just how much money there is in the game, thanks to the $24 billion television contract the league has signed.

The CBA requires that between 49 and 51 percent of Basketball Related Income is distributed to the players, a rate that remains the same as the last deal, although the definition of BRI has expanded and the gross dollar figure is expected to rise from $4 billion to an estimated $8 billion.

When you see those figures, a minimum-wage player getting an extra $244,562 for a season is still getting short-changed when considering that Curry could stand to make $47 million by the 2021-22 season. The NBA, more than the other major pro leagues, is star-driven. But it’s also literally star-run, with Chris Paul and LeBron James occupying senior union leadership roles. The average NBA career lasts 4.9 years, but the median is about two years. In other words, the players likely to be making the least money might only pocket an extra half-million. That’s great by most standards, of course, but harder to stomach in a multi-billion enterprise.

“You’re living pretty good if you’re in the NBA,” Green said. “I don’t want someone to look at me and say that I am inconsiderate about everyone else’s life outside the NBA.

“I grew up in a household where my mom made $16,000 a year. I know the struggle. I know how to keep those things in perspective and I do keep it into perspective. But I do look at things in a business standpoint and I do understand how much money is going around the NBA on a year to year basis. Within that realm of how much money is going around, you can elevate those guys.”