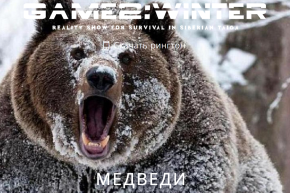 Ah, fake news... is there anything it can't do?

America’s best good pals in Russia have come up with a dandy idea for a murderous reality show. Or maybe it’s a death sport. Or it’s possible the whole thing isn’t real – a product of disinformation merchants eagerly written up by aggregators near and far. It’s hard to tell these days, you know?

The show will supposedly feature 30 contestants, 15 men and 15 women, who will be sent into the Siberian forest where they will battle the elements, wild animals, and fight each other to the death. (Maybe, probably not.)

Guns aren’t allowed, but knives can be included with the 100 kilograms of supplies the contestants can bring as they try to survive temperatures that drop as low as -40 degrees Celsius in the dead of winter while also foraging for food and constructing makeshift shelters with the assistance of a few handy survival tips from ex-GRU Spetsnaz operatives.

Further, a camera crew will not be out there in the freezing cold with them. Instead upwards of 2,000 cameras will be installed throughout the 2.5 thousand acre playing field and they’ll keep rolling 24/7. Players can get their hands on a few other survival tools from viewers at home via an online auction. You know, just like “The Hunger Games!” Should anyone get in trouble (which kind of seems to be the entire point of the show) it’ll take a while for help to arrive.

“Of course there will be some safety precautions in place,” Pyatkovsky told Sputnik, “But it would still take about half an hour to reach the area where the show will take place by helicopter.”

In Sputnik’s original article, published on December 13, there’s no mention of the contestants actively seeking to harm one another and the story didn’t pick up much attention from the rest of the online media. You can see why. “Game2: Winter” is billed as a struggle versus mother nature, with a headline that spells this out pretty clearly: “New Reality TV Show to Pit Man Against Harshest Siberian Wilds.” That’s not too far off from “Survivor” or any of its descendants, even if it’s far more risky for the participants.

Two days later, the Siberian Times spoke with Pyatkovsky and he added a few more lurid, SEO-friendly details. Now, “everything is allowed” including “rape” and “murder,” though he promised there would be consequences for criminal acts.

“You must understand that the police will come and take you away. We are on the territory of Russia, and obey the laws of the Russian Federation,” he said, insisting that neither he nor anyone involved with the show should or will be held liable. “We will refuse any claim of participants even if they were to be killed or raped. We will have nothing to do with this. This will be spelt out in a document to be signed by the participant before the start of the show.”

The Siberian Times also contacted one of the show’s producers, Nikolay Ginzburg, who talked about how the average person might have a better shot at winning the $1.65 million dollar prize should he or she make it to the end with a pulse. (If more than one person emerged, they’d split the cash).

‘It sounds strange,” Ginzburg said. “But on this project it will be easier to survive not for a professional rescuer but for a simple person. It will be necessary to act intuitively, rather than following instructions.”

Aside from a few Facebook and Google profiles, there’s no mention of a “Nikolay Ginzburg” anywhere. Nor can False Start find an online history for “Yevgeny Pyatkovsky,” save for the many sites that aggregated both Sputnik’s and the Siberian Times’ now-viral story. There is one earlier mention from August, also in Sputnik, of a businessman named “Evgeny Pyatkovskyi” talking about the $50-dollar a day “day care for adults” he’d created, where weary Russians can take a break from the daily grind by reverting to childhood. The article features fish eye lens photos of his purported establishment taken by one Evgeny Pyatkovskyi. No staffers or guests are shown.

Someone threw up a really sketchy, glitchy website for “Game2: Winter,” and there’s a bare-bones Facebook page whose first post appeared early Friday morning. Since Sputnik is a known distributor of Russian propaganda – a banner above the “Games2: Winter” article claims that the atrocities in Aleppo are a false flag operation – and the Siberian Times is covering the reappearance of the Yeti, let’s hold off before assuming that this reality TV show is really real.