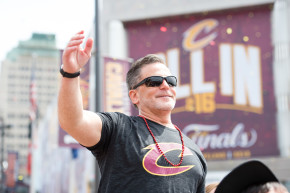 Hey Clevelanders, guess what? All of the devilish details regarding payment for the upgrades to Quicken Loans Arena have been hashed out and now you’ll get those dope glass walls!

This information comes courtesy of a Cleveland.com ‘article’ with the blaring headline: “Quicken Loans Arena, home of LeBron and the Cavs, to get $140 million makeover.”

Alas, headlines be damned, none of that is true.

The reader has to plow through over 1300 words, a pile of misleading talking points, and a whole bunch of cool renderings of what the brand-spanking new Q will look like, but they eventually learn that both the City Council and the Cuyahoga County Council need to approve the use of public funds before one construction worker picks up a shovel.

What’s more, the project will end up costing upwards of $280 million dollars, not $140 million, by the time the interest in the loan is finally paid off in 2034.

Cleveland.com does admit that gifting taxpayer dollars to Cavs owner Dan Gilbert, a man with an estimated $4.8 billion dollar net worth, is “controversial.” But that doesn’t stop them from laying out the case for going ahead with the plan, regardless of the fact that Cuyahoga County is $1 billion in debt and might have other, far more pressing needs to attend to.

And it’s a doozy of an argument. All the Cavs are getting out of the deal is “An arena that’s much more attractive to fans, making them more willing to part with their discretionary income for tickets,” some more concession spots, and “the chance to to compete for big concerts and other events with modern arenas in the nearby cities of Columbus, Pittsburgh and Detroit.”

According to Cleveland.com, the Q is the “13th busiest arena” in the United States. If big-time music tours are skipping out because the concession stands aren’t up to snuff, it might be reflected in that ranking. (It isn’t.) Gilbert just wants wallets that might be emptied at other bars, restaurants, and retail outlets to be doled out to stores within his little fiefdom.

For the public, they too benefit from attracting major events, a thing that is already happening, and they’re also guaranteed that the NBA All-Star Game will come to town, eventually.

Actually, there’s no guarantee at all. NBA commissioner Adam Silver has made it pretty clear that without the glass walls and attendant amenities, the All-Star Game is a no-go. Now, the Cavs CEO, Len Komoroski is alleging that this too is a done deal. There’s no statement from the NBA to confirm this, mind you. Just a promise from him to you, the fans.

But wait, that’s just the tip of this mendacious iceberg. This needs to happen because the Q is on the teevee machine all the time. As such, “it helps mold what the world thinks of Cleveland,” Ceveland.com wrote. “Cleveland’s image it gives Cleveland international attention.” [sic]

So Dan Gilbert might consider relocating the Cavs to some other fine metropolis, maybe one whose various local and state legislators won’t hesitate to give him every single toy on his perma-Christmas wish list? Bull. Seattle’s out there hankering for a team of its own, but this “Nice pro basketball franchise you’ve got here. It’d be a shame if something happened to it” threat is a patently empty one.

Further, Team Give Us All The Money is saying straight out that regardless of how much is spent now they will definitely going to ask for hundreds of millions to build a new arena at some point in the near future, even if the bills for this soon-to-be-obsolete venue are still sitting on the city and county’s ledger.

This article – or rather, this press release and glossy promotional brochure – was published before Wednesday’s press conference. There, Fred Nance, a prominent Cleveland attorney who happens to be LeBron James’ personal business lawyer and counsel to the Cleveland Browns, repackaged the ultimatum in the gauzy, emotional wrapper that is the original Browns’ move to Baltimore.

“For those of us who have lived in Cleveland for some time, we recall what happened here in 1995,” Nance thundered, and the press corps rolled its eyes. “Which is that if we don’t take care of the facilities in which our professional sports teams play, we are at risk of losing them.”

Calling one’s local state, city, or council representative and expressing your disgust has become quite A Thing of late. Still, with all the other imminent crises, we’d advise everyone in Cuyahoga County to get a politician on the horn and let him or her know that this is a terrible idea, one that they have the power to stop.