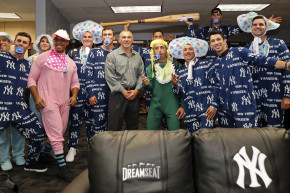 An important tradition that must be defended at all costs — Getty Images
By Robert Silverman
Dec 14, 2016 at 1:29 PM ET

Teams and players themselves, whether by unwritten rule or coercion, cannot dress up as women or be forced to don, “Costumes that may be offensive to individuals based on their race, sex, nationality, age, sexual orientation, gender identify or other characteristic.”

Here’s a prime example from last season, when the New York Mets’ choice of cosplay was the short-lived, post-World War II All-American Girls Baseball League, specifically the two teams at the center of the Tom Hanks and Geena Davis 1992 flick, “A League of Their Own.”

Really nice of the rookies to get up early this morning and get coffee for the vets. #StillBetterThanAAA #Mets pic.twitter.com/iODfwCC16K

The point, in case it’s not patently obvious, is that dressing up as a lady is a priori humiliating for a man—a real man, that is. It’s an attempt at degradation derived from the notion that women are less-than that goes back to the sexually-charged hazing perfected by British public schools, and still can be found in the armed forces and fraternities across the U.S.

And within this closed, nearly all-male group, it is largely seen as a funny bit of bonding and a necessary rite of passage, though according to the Associated Press, a number of players did complain to the MLBPA. But when shown to the rest of the world, yes, there are going to be people that find it not just offensive, but a clear indication that a whole bunch of archaic, sexist tropes haven’t come close to being eradicated. (Because they haven’t.)

A few current and former Major Leaguers don’t like this rule change one bit, and instead of blaming, say, their union, they spent Tuesday lashing out at all the wrong targets, and revealing exactly why this practice needed to end.

How rediculous! The world has gotten 2 damn sensitive! This has been a time honored tradition. The world is full of sensitive snowflakes https://t.co/Zhadz1MXBf

Most of you people do the same thing for Halloween but it's ok for you to do it because it's funny. Save it. It's not about being demeaning

It’s since been deleted, but former Boston Red Sox star, Kevin Youkilis, tweeted, “Seriously?! Had to wear a Hooters outfit going through customs in Toronto and wore it proudly bc I was in the Show.” [sic] Then he insisted that baseball should focus on the ongoing Syrian genocide, because that is clearly an issue within baseball’s purview.

“If we’re getting so P.C. either as an industry or as a society that we can’t make fun of ourselves at times, that would be, I think, harmful to the game in a certain way,” Colorado general manager Jeff Bridich said, unaware that they’re not making fun of themselves at all, nor will this harm “the game” one bit.

In an emailed editorial, Los Angeles Angels reliever Huston Street dumped a whole pile of clumsy rationalizations. Somehow, it’s all in good fun because people dress up during Halloween and the PC thugs are stifling comedians.

While “singling someone out for a difference or a weakness is disgusting” to Street, he can’t seem to wrap his mind around the idea that he’s condoning precisely that. He does inadvertently come to one correct conclusion.

“Much of the time the outfit is an inside joke that might be a play on one word or instance that occurred during the season,” he writes. “And everyone on the team understands the symbolic nature of the outfit. But to those on the outside, they interpret it completely different.”

Right! What was a story that would have been limited to a few sidebars in a beat writer’s column as recently as a decade ago now buzzes around on social media. As such, the way others interpret this is important, especially for Major League Baseball, whose past attempts to attract a larger number of female fans have been pink-slathered and tone-deaf at best, with routine forays into the downright condescending. Hell, as recently as 2011, MLB asked a blogger if they could use a photo of Mike Trout dressed as Lady Gaga in its promotional materials.

We can give baseball a pat on the back for getting this right, even if the motivation isn’t so much enacting responsible policy as it is scuttling bad PR, but let’s not get it twisted: Street and everyone else railing against “sensitive snowflakes” very much want to protect the privilege to do something gross.

Notice the language that keeps popping up here. Their ritual, one that specifically mocks women and outright says that women are weak, is threatened and the response is to project, labeling everyone else “weak.” Maybe, instead of showing how fragile their definition of masculinity is, they can come up with another bonding exercise. It’s not like they’re forbidden from playing dress up; it’s a relatively minor set of restrictions, one that should be easy to follow. But nah.

Like Street said, the response to the ban will be to close ranks and drive these tribal rituals underground, far from public scrutiny, which is exactly what privileged, closed groups often do when exposed. We’re sure they’ll be able to pull that off.