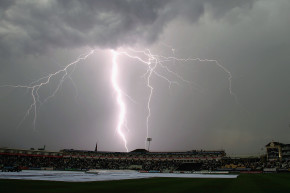 Cloud seeding, if it actually works, could make such a thing deliberate in the future

Did Mother Nature have money on the Dolphins?

Judging by the reaction of the Arizona Cardinals players after they lost to Miami in an overtime game featuring drenching rain, they seemed to think the weather patterns were a little too convenient. Consider these comments in the AP recap:

“Every time we got the ball it seemed like it was pouring, like a monsoon,” Cardinals receiver J.J. Nelson said. “I’ve never played in anything like that.”

“We practiced with a wet ball on Wednesday and didn’t have any problems,” Arizona coach Bruce Arians said. “But when it continually pours when you have the ball, which was kind of odd, it’s tough.”

“Every time we had the ball, it just started turning on and staying on,” Palmer said. “Then it would stop.”

Kind of odd, eh? Sports fans are used to weather manipulation akin to the infamous 1982 Snow Plow Game—when a Patriots employee illegally cleared a spot for the winning field goal—which was a matter of modifying the results of the weather, not its actual creation.

Then again, prior to the 2008 Summer Olympics, Beijing fired rain-dispersal rockets into the sky, using silver iodide to seed the clouds and cause precipitation—in this case, in advance of an event so the Opening Ceremonies themselves were dry.

It turns out, there exists a Beijing Weather Modification Office that regularly engages in a similar practice prior to major holidays. They’re not alone, in this endeavor, either. Russia, India, and the U.S. are among the at least 52 countries said to have used the technology to trigger rain, too. It is now a major global business.

Cloud-seeding is the 1946 invention of Vincent Schaefer, a General Electric chemist and meteorologist. His colleague who helped refine the practice with silver iodide was none other than Bernard Vonnegut, the older brother of the famed novelist Kurt Vonnegut. So it goes.

There’s even a company called Weather Modification Incorporated in Bowman, North Dakota, a Weather Modification Association, and a position statement from the American Meteorological Society, which urges cautious, methodical research because there are “limits to the certainty with which desired changes in cloud behavior can be brought about using current cloud seeding techniques.”

In other words, the idea of nefariously targeted rain storms remains, for now, complete and utter nonsense. There is even some debate about how well—or, if at all—the cloud-seeding technology works. A National Academies panel in 2003 declared that, as of then, the practice had “no convincing scientific proof.”

More recently, the six-year Wyoming Weather Modification Pilot Project seemed to increase snowfall by 5-to-15 percent did not definitively conclude that cloud-seeding works because the experiment did not reach statistical significance, “but the results do provide a body of evidence that cloud seeding is working under certain conditions,” Roelof Bruintjes, atmospheric scientist at the National Center for Atmospheric Research, said to Chemical & Engineering News.

So there maybe kinda sorta is potential for someone to deliberately interfere with sporting events through the weather. To paraphrase the co-creator’s brother:

All this could happen, more or less.