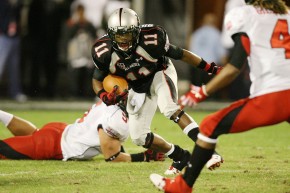 A state-wide database will provide objective evidence, but is far from comprehensive

The association overseeing Texas high school sports is reportedly launching a state-wide database to catalog concussions in its youth athletes.

Texas, the nation’s second-most populous state with some 800,000 public high school athletes, will track about two dozen sports, according to the Associated Press, with football of course likely to draw the greatest scrutiny.

The study will be conducted in conjunction with Texas-Southwestern Medical Center in Dallas—the state’s flagship public medical institution—and will detail all pertinent info about each diagnosed head injury, such as cause and recovery. The high school organization’s deputy director, Jamey Harrison, told the AP that currently only one school from each district is required to report concussions in its weekly system.

“Right now it’s a sample that is just a snapshot,” Harrison told the news wire. “It’s not scientific. We need to move beyond that.”

Yes, yes, a thousand times yes. This endeavor is a welcome start to bring objective measures to determining which athletes are at the greatest risk of concussions and in which situations. The report quotes the study leader C. Munro Cullum—a Ph.D. neuropsychologist whose bio says he has worked with the NFL’s Dallas Cowboys and NHL’s Dallas Stars for almost two decades—saying that this will help guide what rule and equipment changes need to be made for the better protection of the state’s athletes. And, as Texas goes, other states will inevitably follow.

For a start, Texas ought to move into immediate compliance with existing national guidelines. A Houston Chronicle report last month cited an audit from volunteer safety policy advocates that states only 12 of the 50 states are even adhering to three of the five recommendations from the National Federation of High School Associations. Texas follows two: offseason contact ban and a heat acclimatization plan. The other three involve preseason contact limits, in-season contact limits, and a restriction on game play each week.

Concussion has become a helpful buzzword to generate conversation about player protection, but it’s only the most visible sign of brain injuries. Sub-concussive contact and accumulation from repetitive hits adds up—and is not so easily studied.

As Dr. Jeffrey Kutcher—director of the NBA’s concussion program, adviser to the NFL and NHL Players’ Associations, and national director of the Sports Neurology Clinic at The Core Institute in Michigan—recently told Vocativ:

“I think next breakthrough needs to be a clinical revolution in which people recognize that concussion is not really the problem. It’s long-term brain health that’s the problem. Concussions are medically defined as being transient. They are things that resolve and go away.

“When you read in the newspaper or on the Internet about famous athletes who have missed two months, three months, six months of the season, that’s not a concussion. The concussion was over long ago. They had post-concussion syndrome, and that’s a different diagnosis that requires different treatment.

In other words, implementing those NFHS contact restrictions could have even more impact than a concussion study, though the latter will offer some benefit, too.

Given that the athletic director for the state’s high school body told the Dallas Morning-News this summer that an injury tracking program was being made up as they went—“We’re kind of building the plane as we’re flying it,” Susan Elza said. “[We’re hoping for] more sound data and more structure to collecting that data”—at least this Texas study is progress.