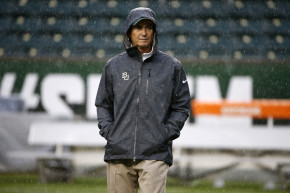 Baylor University’s former head coach Art Briles filed a lawsuit on Thursday accusing four University officials of lying about his knowledge of and failure to report multiple alleged sexual assaults that were committed by members of the football team, according to the Associated Press. Briles also claims that Baylor officials conspired to ruin his reputation, leaking information to the press and rendering him unemployable.

“Some people think themselves above the law, but the laws of Texas establish accountability for everyone, even renegade, self-dealing regents of a Christian university,” the lawsuit states. “These defendants have been relentless in their false attacks upon Coach Briles in the media despite his repeated requests they cease and retract their onslaught of untruths.”

Briles, who was fired in May, initially sued the school for wrongful termination. Both parties came to a settlement agreement one month later, voiding the final eight years left on his $6 million per year contract, and seemingly signaling an end to his legal battles with the University, though Briles has denied that he had any knowledge of the alleged crimes that were committed under his watch. In an interview with ESPN in September, he admitted that he “made some mistakes,” and said, “I think we did the best we could at the time,” though he never specified exactly what those “mistakes” were, nor did he ever utter the words “sexual assault.”

But in October, the Wall Street Journal citing interviews with multiple members of Baylor’s board regents, reported that Briles was informed of at least one alleged gang rape but failed to notify the proper school officials. One board member named in Briles’ lawsuit, J. Gary Gray, spoke on the record, describing the toxic culture in which an alleged 17 sexual assaults were perpetrated by 19 athletes over a four-year period.

“There was a cultural issue there that was putting winning football games above everything else, including our values,” Gray said. “We did not have a caring community when it came to these women who reported that they were assaulted. And that is not OK.”

A statement put out by Baylor in November also asserted that a student reported a gang rape to Briles and then-athletic director Ian McCaw, but both parties failed to report the charges. McCaw has since been hired by Liberty University.

According to the lawsuit, Briles was unaware of the size and scope of sexual assault charges during his tenure.

“Prior to their publication in the Wall Street Journal, Coach Briles had never heard these facts or these numbers,” the lawsuit states. “These statements and alleged facts had never before been disclosed by any member of the Baylor Board of Regents and were never discussed at the time of Baylor’s investigation of and settlement with Coach Briles,.”

Deadspin obtained a full copy of the lawsuit, which can be read in its entirety here. Briles is seeking more than $1 million in damages.