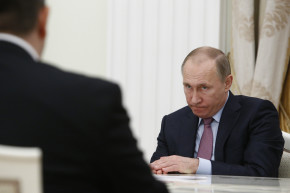 The Russian Doping Crisis Is About To Blow Up

Most of the Latin alphabet continues to excoriate Russia over its doping crisis. Just this month:

-Track and field’s governing body, the IAAF, indefinitely extended its blanket ban of Russian athletes for a second time.

-The IOC, the International Olympic Committee, renewed its own penalties against Russia, which includes revoking its “patronage” of sporting events hosted by the country and stripping accreditation from Russian sports officials.

–The New York Times reported that the USOC, the U.S. Olympic Committee, has privately supported American bobsled and skeleton athletes boycotting a world championship in Sochi, Russia, in February (though, after the article’s publication, a USOC spokesman said it does not support a boycott).

-After Russia named pole vaulter Yelena Isinbayeva as chair of the board for its revamped drug-testing group, RUSADA—she told the Guardian this summer that the Olympic ban of Russian track athletes violated her human rights—WADA, the World Anti-Doping Agency, released a sharply worded statement to the AP promising that it’ll be “addressing concerns directly with the Russian authorities” and that it “had expected to be consulted regarding important matters.”

And the biggest hammer will drop on Friday, when WADA releases the second installment of the McLaren Report, an investigation into Russian doping by Canadian law professor and international sports expert Richard McLaren. The first report, released in July, accused Russia “beyond a reasonable doubt” of a systemic, state-sponsored doping system organized and executed by its ministry of sport, internal intelligence agency, and its national center for sports training.

This latest edition, which McLaren will unveil at a London hotel, has the benefit of another five months of work and is expected to delve deeper into specifics of the athletes who have doped. Because WADA is independent from the IOC, the report is not expected to make recommendations and only present facts, from which the latter group will be charged with deciding Russia’s punishment and/or road to rehabilitation. The IOC even commissioned two seemingly rather parallel investigations into the matter.

This is a big opportunity for the international sports community to prove its commitment to clean competition, but only if all the acronyms can get on the same page and if Russia can take this situation seriously—its circumvention of WADA to appoint a vocal critic of the doping investigations is not a good look.