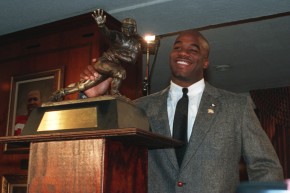 Get ready for the stupid

On Monday night, police found the body of Rashaan Salaam, the 42-year-old former University of Colorado running back and first round draft pick, in Eben G. Fine Park in Boulder, Colorado.

No formal determination has been made regarding the cause of his death, but that didn’t stop the Denver Post’s Mark Kiszla from rubbing his chin and sincerely asking, “Did Rashaan Salaam die from carrying the burden of winning the Heisman Trophy?”

I swear this isn’t a terrible attempt at satire gone horribly wrong. He really wrote this. Kiszla even began banging out this take before USA Today published its story before anyone in a position to know had mentioned the word “suicide.” He or someone at the Post appears to have cleverly updated it after the fact, and yet neither Kiszla nor his editors deigned to bring the reader’s attention to any possible changes save for a small-font mention at the top that says the column was published on December 6, 2016 at 7:37 pm central time and then “updated” today at 8:43 am.

Even so, check out this faux-sincere mess of a lede:

In the end, did Heisman Trophy winner Rashaan Salaam know how many people loved him?

People will still choose to end their lives so for reasons that have nothing to do with the amount of loved ones in their lives and whether they are capable of experiencing that love. That’s horrifying to contemplate, yes, but Kiszla should have stopped right there and realized how far off track he was. Of course he keeps going, quoting bewildered and clearly suffering friends of Salaam’s to reinforce his initial idiotic point while adding a few details about his football career. In the final paragraphs, though, Keszla really drives this garbage column home.

So why would Salaam check out? We don’t get it. We seldom do, maybe because the last thing a football star ever wants to show is pain. You gotta play hurt, right?

Then, he decides to answer his own unanswerable question in the most ridiculous, wrongheaded way imaginable.

The Heisman Trophy is cast in bronze, but the life of a man who wins it is not paved in gold. Salaam conquered the football world at age 20. That left a lifetime of mornings to wake up and not have 50,000 people cheering him on.

The Heisman weighs 25 pounds. Yes, it’s a big prize. And it can also be a heavy burden to carry.

Fuck off, Mark Kiszla. Fuck all the way off. It’s hard to expect a shred of decency from a dude that once spouted xenophoblic crap about the Denver Nuggets’ 2012 first rounder, Evan Fournier, but this is beyond the pale. Pinning Salaam’s last actions on (according to Mark Kiszla and without any supporting evidence) perceived failures in a professional career is not only flat wrong, it’s profoundly cruel and can cause real harm to people with suicidal thoughts.

In fairness, you gotta churn out copy, right? Speaking of…

A newspaper column lasts about 800 words. Yes, it’s a big prize. And it can also be a heavy burden to carry.