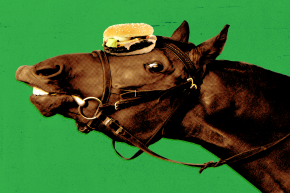 In the hours before Manchester City hosted Celtic F.C. in a Champions League match on Tuesday, a 27-year-old man in Piccadilly Gardens was holding a hamburger in close proximity to a police horse named Lancaster.

The man then threw the burger and struck the horse. His reasons are known only to him and his deity, although his subsequent arrest for drunk and disorderly conduct hints at his motive. His name was not released, and we may never know his quarrel with the horse.

Celtic fan arrested for throwing a hamburger at a police horse in Piccadilly Gardens. Male started kicking about in the van! #nightinacell

There was no word whether there was a second food-chucker across the green. The horse is recovering nicely.

The worst throws are those that cause harm. That includes the horribly racist and deplorable practice of some soccer fans throwing bananas onto the pitch at black players. It also includes any projectile that creates an unsafe playing area, most recently when a Blue Jays fan threw a beer can at Orioles outfielder Hyun Soo Kim.

During the 2010 NBA Finals in Boston, a fan threw a small vodka bottle at the Lakers’ Lamar Odom. In the 2009 playoffs, a fan in Denver threw a beer bottle onto the court. Also in 2010, a rash of Toronto Maple Leafs fan hurled waffles onto the ice. After one incident, the broadcaster said, dryly, “The waffles are on the ice again. Whatever that means.”

We have a small understanding of Wafflegate because one man, Joseph Robb, was identified as a copycat culprit. He told the Star that he threw thawed, soft waffles and did so “just to say ‘wake up’ or something. Stop treating your fans like Eggos.” Sure, right, of course.

Tiger Woods has been on the putting green twice when food landed nearby. Once, an unbunned hot dog landed several yards away. Another time, a Granny Smith apple rolled across his line of sight, prompting a classically understated golf announcer to quip, “This is not good.”

While there are benign instances, such as the Detroit Red Wings’ tradition of throwing an octopus onto the ice in celebration, there is rarely a good time or reason for sporting food fights. I was once in the far reaches of old Yankee Stadium’s upper deck for a playoff game and dared to cheer for the visiting team. Peanuts were hurled at my back for hours and, after one notable play, I stood up and put my hands together and . . . wait, why are palms suddenly so dry, hard and, uh, salty? Sure enough, a peanut sniper had managed to plant one between my hands, mid-clap, which was scary and also quite impressive.

Even pro athletes have thrown food in the stands. Golden State Warriors forward Draymond Green was captured throwing food during a fan dispute at a 2015 Seahawks-Panthers playoff game. He later said on Twitter, “people know they blow stuff out of proportion…. It was 4 GRAPES!!!!”

And then, of course, there is the landmark sports food-throwing incident by which all others are judged: the Red Sox Pizza Chucker.

Amidst the commotion of a foul ball reaching the left-field stands, an unexpected triangular projectile enters the frame and leaves a red-saucy mess on a man’s shoulder.

NESN broadcasters Jerry Remy and Don Orsillo subsequently do their Zapruder best in breaking down the footage. While showing the replay, Remy excitedly blurts out, “Here comes the pizza!” Orsillo clarifies, as if it’s necessary, to say, “Highly unnecessary.” Remy then explained that the thrower was ejected from the game: “He’s been asked to leave the ballgame for ruining a good piece of pizza.” They eventually break into hysterics, rendering them incapable of speech.

Amazingly, six years later, the Pizza Chucker returned to Fenway with his friend dutifully carrying a neon sign, “I’m with the Pizza Chucker.” Then-NESN reporter Jenny Dell proceeds to interview the man in a Frost vs. Nixon interrogation of the incident. Dell said, “I’m sure this has been a question on many people’s mind . . . What was going through your mind when you threw the pizza at the fan in front of you?” (Dell, ever the professional, managed to ask this with a mostly straight face.)

The Chucker replied that the other fan had not been friendly to those around him during a prior rain delay and said, “There was a foul ball that distracted him, and I threw the pizza on his head. I wish I could take it back, but it happened and he kind of deserved it.” He said of his friends and family: “They weren’t so impressed.” It now receives annual commemorations as part of the canonical rite of Fenway Park lore.

“You’ve made a lot of people smile over the last few years,” Dell said. “Although I don’t suggest that you throw food at people, thank you for doing that.”