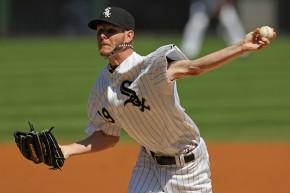 Baseball remains a sport of uncertainty, from prospects' futures to pitchers' health

This type of package deal is a Dave Dombrowski specialty. Boston’s president of baseball operations has never been shy about trading away promising prospects for established talent. While running the Expos, Marlins, Tigers, and now Red Sox, Dombrowski has traded packages of minor leaguers for Mark Langston, Gary Sheffield, Miguel Cabrera (and Dontrelle Willis), Anibal Sanchez, David Price, Craig Kimbrel, and Sale, among others.

Dombrowski has garnered a reputation of a shrewd dealmaker, which is mostly warranted, but high-frequency traders are bound to miss on a few. His track record has some significant misfires, too.

Though Langston was great down the stretch for the Expos in 1989, Montreal missed the playoffs and one of the prospect he gave up was a future Hall of Famer, Randy Johnson. Sheffield was a worthwhile acquisition for the Marlins in 1993—he hit 122 homers with a .970 OPS in six seasons, helping Florida win the 1997 World Series—but he came at a cost of 600-save closer Trevor Hoffman. Dombrowski also once traded a future two-time Cy Young winner in Johan Santana for a minor leaguer named Jared Camp who never reached the big leagues.

Such swaps of prospect packages for stars is a curious construct unique to baseball, which of course is the only sport with extensive minor leaguers and whose draft picks toil for years before reaching the top level. The sport is so diffuse, with championship rosters requiring so many good players peaking concurrently. Mastering the timing is critical—and difficult. That lag time waiting for players to develop is painstaking, and many can’t miss prospects go astray and do, in fact, miss.

Trading the known for the unknown is inadvisable in most business and sporting sectors, but common practice in baseball, where clubs hoping to contend (such as the Red Sox) can rarely afford to yield active contributors from their big league roster. These deals are as volatile—and equally lucrative or bankrupting—as the commodities futures market. (Incidentally, the Red Sox’ billionaire owner John Henry began making his fortune trading corn and soybean futures.)

Baseball prospects are weighted lottery tickets. The hope of this trade is likely that, of the four minor leaguers, maybe one becomes an All-Star and another becomes an above-average regular. If either of the other two make any contribution, it’s a bonus. It’s a worthwhile deal for Chicago because of the quantity involved, of players and years. Given baseball’s labor structure, the White Sox will have team control over each acquired player for six and nearly even seven seasons apiece, hedged steady above-average contribution over a half-dozen years against Sale’s projected elite performance for three.

Prospect valuations are growing more accurate, due to the increase of available information and rise of sophisticated projection tools. Information, whether video or statistical, is supplied in abundance. While draft picks are still tricky bets, the major prospect ranking lists—which incorporate minor leaguers at all levels—are growing a bit more reliable. Scan Baseball America’s all-time prospect rankings to see for yourself.

More clubs are turning their franchises around successfully and doing so in half as long as they used to. As Phillies president Andy MacPhail said last year, “Your progress isn’t linear anymore.”

“There’s a better blueprint for how to rebuild,” Cubs GM Jed Hoyer said.

The Red Sox will have Sale for three seasons, when the pitcher is 28-29-30, and for only $38 million—an enormous bargain in today’s economics; Sale would easily fetch $30 million per season on the open market. He instantly makes the Sox, who won 93 games last year, the early AL favorites.

This trade allows the White Sox to reset the clock. Sale in his prime doesn’t help the White Sox that much right now because they lack so many complementary players. Chicago has their shortstop of the future in Tim Anderson and two high-end starters remaining in their rotation: All-Star Jose Quintana, who’ll turn 28 in January, and Carlos Rodon, a former No. 3 overall pick about to turn 24. Their top three prospects—catcher Zack Collins and pitchers Carson Fulmer and Zack Burdi—are all first-round picks aged 21 or 22 on the fast track to the big leagues. Moncada and Kopech are on track to join them.

They are now joined by the Red Sox’ Nos. 2, 4, and 8 prospects, according to Baseball America’s offseason tabulation. Moncada ranked No. 1 in all of the sport in BA’s midseason list after cruising through High A and Double A ball as a 21-year-old. His eight-game major league cameo didn’t go that well, but he’s the biggest prize for Chicago—close-to-big-league-ready and with a world of talent. Kopech has hit 105 mph on the radar gun and, in A ball last year, struck out nearly 14 batters per nine innings with a 2.08 ERA.

A conflation of market forces—inflationary free agency, exponential growth in media rights, record-breaking revenue, an industry-wide trend toward contraction extensions—has driven up the salaries of veteran players like never before, which in turn is raising the value of cheaper, younger talent.

That shift would seem to favor the Red Sox’ end of this deal. Prospects are meant to be traded, right? Boston acquired a sure thing, a year-after-year All-Star for a bunch of maybe-some-days.

Sale, nicknamed The Condor for his lanky cross-armed motion, could win the Cy Young and a World Series. Or his arm could blow. Sale’s unorthodox mechanics introduce even more uncertainty into his long-term health prognosis. He served two disabled-list stints in 2014 for flexor-muscle strains, which is thought by some to be a precursor to Tommy John surgery—which more than a quarter of all big league pitchers have anyway. At the time, which was more than two years and 500 innings ago, an MRI showed no ligament damage.

The lesson, as always, is that no one can predict human performance—and certainly not in baseball.