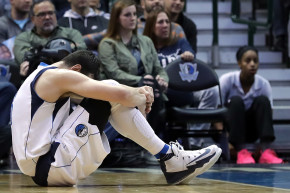 Andrew Bogut Is A Pizzagate Truther
By Robert Silverman

Andrew Bogut Is A Pizzagate Truther

Andrew Bogut, the Dallas Mavericks center, has dipped his big Aussie toe into an insane conspiracy theory that’s been festering in the fever swamps of the white nationalist far-right known as Pizzagate. Or, since misinformation like this wouldn’t exist without the insular, self-validating bubbles of both social and the far-right media, #Pizzagate.

If you haven’t delved into this easily-debunked nonsense, in brief, #Pizzagate devotees believe Hillary Clinton and her allies have been running a child trafficking ring out of a local Washington D.C. pizzeria, Comet Ping Pong. This is not a thing that is even remotely true. Buzzfeed tracked #Pizzagate’s life cycle, and surprise, surprise: it originated from fake news sites, 4chan, and Reddit with a helpful signal boost from a swarm of Twitter trolls and YouTube detectives, all of whom see an elaborate, all-encompassing criminal plot deftly hidden in anodyne email messages and Instagram posts.

How exactly Andrew Bogut discovered this isn’t clear, but given that he recently started following #Pizzagate truthers like Mike Cernovich, InfoWars, Paul Joseph Watson, and Gavin McInnes, it’s not hard to take an educated guess.

If only 1% of this #pizzagate scandal is true, all people involved deserve life in prison (or worse). #sick

When someone tried to gently explain that legitimate news sources had investigated this false story, Bogut provided a response not unlike this viral CNN clip in which a Trump voter was absolutely sure that President Obama had encouraged millions of “illegals” to vote in California, adding that she’d seen a report on CNN itself. (The President did no such thing, nor did CNN.)

But it wasn't on CNN? https://t.co/shpuZFP1Nq

Bogut also feels that all of mainstream journalism cannot be trusted.

Nor can you turn to Snopes as a reliable means of debunking a conspiracy.

For Bogut, the sheer volume of “evidence” gathered by trolls means something nefarious has to be going on here. (None of the evidentiary material they’ve gathered passes the smell test. A prime example is this guide for decoding John Podesta’s leaked emails in which “cheese” means “little girl.”)

@jeremiah_rr @blanchardJRB yep cause pics on their own social media accounts were perfectly normal…. #smoketheresfire

This photo has been making the rounds amongst the true believers. It’s from Comet Ping Pong’s owner and means absolutely nothing, but to Bogut and his fellow blinkered #Pizzagate sleuths, it’s a smoking gun.

So Bogut’s acting like many a low-information news consumer, duped by sensationalistic bias-confirming headlines, unable or unwilling to modify his position when confronted with evidence to the contrary, and he lacks the basic Communcations 101 skills necessary to sort fact from fiction. We can laugh and snort at this, to be sure, but when some doof with a gun waltzes in to Comet Ping Pong to “self-investigate,” fires off two shots while looking for non-existent kids tied up in the restaurant’s non-existent basement, and the owners receive death threats, that’s scary as hell.

What’s worse, it seems clear that Bogut’s social media proclivities have played a part in radicalizing him and he already possessed enough of a libertarian’s distrust of institutions ranging from “the media” to the Hillary Clinton political machine that he’s willing to Hear Both Sides.

Regardless of whether Bogut considers himself a racist – and he’d abjectly deny it – he’s spreading their message. And he’s far from alone. As The Guardian reported, various actors including the manosphere, pick up artists, and the Breitbart wing of the GOP have spent years sowing distrust and polluting the overall online ecosystem. As such, the Overton Window has been shunted so far into the implausible that #Pizzagate is something seemingly rational adults can believe, even (and feel free to question how ‘rational’ this example is) individuals on Trump’s transition team.

The conspiracy theory doesn’t need to bear a shred of reality for it to achieve its desired ends either. Pushing this insanity to the forefront and dragooning responsible journalists into spending time and effort debunking it only reinforces the biases that allowed #Pizzagate to flourish in the first place. Just look at Bogut, who assumes that those same institutional forces have spent years lying to him and people of his ilk. The debunking only ends up suborning and reinforcing the lie, and in the kind of self-ratifying echo chamber Bogut’s joined, it’s impossible to hear one true signal amidst an overwhelming swarm of noise.