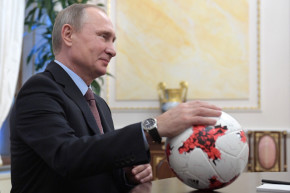 FIFA 17 Is Gay Propaganda Per Russian Politicians
By Joe Lemire

You can't make this stuff up

Soccer, it has been said, was a communist plot to diminish Americans’ upper-body strength and a liberal scheme crafted by those who “fetishize race” and want to accommodate immigrants. Its most popular video game has been a vehicle for multi-million-dollar fraud. So yeah, soccer is kinda weird.

And now, in the latest ridiculous iteration of conspiracies ascribed to the sport, some members of Russian parliament are reportedly accusing EA Sports’ FIFA ’17 of being illegal gay propaganda. Really.

You see, the UK’s Stonewall group organized the Rainbow Laces campaign to promote equality, and the Premier League rallied behind the initiative last month with executive chairman Richard Scudamore writing a letter to several LGBT supporter groups, saying, “We know there is more that we can do to use the spirit and energy of the football on the pitch as a force for good off it, and that is why the Premier League has decided to support Stonewall’s Rainbow Laces campaign.”

Electronic Arts, which recently received a 100-percent rating on its Corporate Equality Index from the Human Rights Campaign as an LGBTQ-friendly workplace, followed suit, allowing video gamers to mimic the on-pitch campaign.

Show your support, get your FREE Rainbow kit in FUT now! More on the #RainbowLaces campaign: https://t.co/2NohXaloXe pic.twitter.com/xSbY9G8wAp

This, however, caught the ire of bigoted Russian MPs, who reportedly are seeking intervention from a government oversight agency because FIFA ’17 now violates the country’s neanderthalic laws. Communist MP Valery Rashkin told Izvestia, a Russian newspaper, that the government should force EA Sports to “introduce changes to the programming code or the age classification of this information product, and if it refuses, adopt corresponding restrictive measures” (translation via the Guardian). EA did not immediately respond to Vocativ’s request for comment.

This, of course, is patently ridiculous. But such wacky headlines can’t be dismissed because of the serious consequences such tacitly accepted behavior can have in certain parts of the world. For instance, Stonewall’s statistics on anti-gay bigotry is startling:

Worse still is the legislation that Russian president Vladimir Putin has signed into law. In 2013, a statute went into effect banning the promotion or propaganda of what it deemed “non-traditional sexual relations.” A bill drafted in 2015 would make it illegal to even signal one’s homosexuality—even by something as small as, say, holding hands. Homosexuality in Russia was officially decriminalized in 1993, but the country’s attitudes toward equality are regressing badly.

All of this will come to a head in 2018 when Russia hosts the World Cup. FIFA publicly asked Russian authorities “for clarification and more details on this new law,” referring to the 2013 measure, while then citing the non-discriminatory measures in its Code of Conduct . . . and then apparently accepted Russia’s explanation because the World Cup was not moved.

The FARE Network, which seeks to combat discrimination in soccer, is already worried that Russian hooligans are planning to incite “significant fear” at the 2018 World Cup after several racist and homophobic acts at this summer’s Euro Cup, according to an Associated Press report. The equality group has “significant concerns” for Russian visitors who have “a visible African or Asian heritage or those from the LGBT community” could be assaulted in some host cities.

FIFA—the governing body, not the video game—has already announced plans for a new anti-discrimination monitoring system at the 2018 World Cup, in conjunction with FARE. But the sad reality is that, if the video game can’t even be accepted there, more than simple monitoring will be needed.