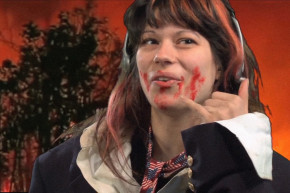 The Aramark Corporation, provider of fine baseball foodstuffs like this 1,980-calorie artery-clogging burger, used to employ a woman by the name of Emily Youcis as a vendor at Citizens Bank Ballpark. Over the last seven years, Youcis, who is also an aspiring animator with a Patreon account to boot (more on this in a bit), gained a smidgen of local fame by howling “pistachios” and “Cracker Jacks” in a metal-ish, tremolo’d growl, known in Philadelphia as the “Pistachio Girl.”

She was fired one week ago, when her employer discovered her Twitter handle and/or read any number of articles writing up her conversion to white nationalism. Oh, sorry. She considers herself a member of the Alt-Right, who are white nationalists, or neo-Nazis. In a statement, Aramark confirmed that Youcis had been let go, telling Philly.com Youcis holds views which “contradict our values.”

That’s been the case for a while. At some point in April, Youcis decided that ballpark notoriety wasn’t enough, outing herself as a Trump backer and popping up in various racist internet outlets.

She started wearing a “Make the Phillies Great Again” hat while hawking peanuts and Cracker Jacks at Citizens Bank Park. She was seen in a Breitbart News YouTube video, titled “Trump Girl Trolls #DemExit Protesters,” yelling into a megaphone that Hillary Clinton is a rapist. She appeared on The Gavin McInnes Show, where she asked him to join her in reciting the white-supremacist slogan known as the “14 words.”

“We need to let people know this is a white movement,” Youcis told McInnes. “This is about preserving the white race.”

Youcis heckled former Gawker CEO Nick Denton in August, hanging around the entrance to a final gathering for the now-defunct site, trying to find a way to sneak in to the party, and accosting Denton to falsely accuse him of being a child pornographer. Chuck C. Johnson’s festering sinkhole of insane, conspiratorial nonsense, Got News, hosted the clip of Youcis’ Gawker “sting” just to give you an idea of how low she’s willing to stoop.

She then attended the white supremacist National Policy Institute’s recent conference, where Youcis went around asking protestors, “Do you hate white people?” One responded by spraying Youcis with a substance she says was paint and presto: now she’s free to portray herself as a victim and anything but a sad little troll.

“These people — the protesters, the (anti-fascists) who sprayed me with spray paint and beat the crap out of my photographer … they claim to be for peace and love and they claim to be against violence but I was hurt trying to talk to them,” Youcis told Philly.com’s Will Bunch. “They are the ones who are violent.”

The above is a pretty predictable shtick: yell incoherent, inflammatory and easily-disprovable nonsense as if it’s some bold act of citizen journalism. Then, when the target of this kayfaybe muckraking either fails to respond or lashes out, post the clips everywhere and declare victory, as all the people who have retreated to Gab gibber, seethe, and applaud

So what’s next for our plucky white pride heroine? In an interview posted Saturday on Red Ice TV, a white supremacist media platform which also hosts Andrew Aglin, the founder of the neo-Nazi’s oldest online beachhead, the Daily Stormer, Youcis complained that Aramark is descriminating against her. Youcis also mentioned that there was a social media clause in her employment contract with Aramark, but that didn’t stop her and the host from asking any lawyers that might be listening to take on her case pro bono. She hopes she can find a plucky attorney, because she might be able to win some real “fuck you money,” all of which she said she’d then turn around and donate to “the cause.”

According to Youcis, Bunch’s coverage of the NPI ‘incident’ is what really led to her termination. She is less than thrilled with him.

So I deserve to be fired for having White Identity but you can identify with a Socialist Jew who scammed millions from broke kids? https://t.co/9GVe0lynC0

If the above tweet isn’t clear enough, she’s an anti-Semite.

Book I wrote when I was 10 based on a game I played about the Dog Uprising. Replace Dog w Goy and Human w Jew and it describes near future. pic.twitter.com/qZ0eVU3LV4

PhillyVoice spoke with a few of Youcis’ friends, trying to figure out why a lovable ballpark vendor would make a sharp turn towards fascism or if this actually just a “publicity stunt” to bolster her animation career. Her friends seem to think it’s the latter, but Youcis remains insistent that she’s expressing her sincere (if vile) political opinons. Regardless, whether she’s just posing as a bigot or is an actual bigot doesn’t matter. And there are certainly plenty of rubes out there who are more than susceptible to being conned out of serious money by far right demagogues.

I got an overwhelming amount of d'nations and support last night into this morning. Just want to give u all a massive thanks. God Bless <3<3

Please, do not give this woman any money.