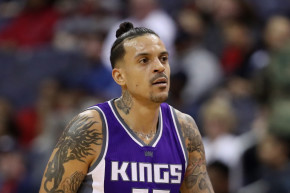 Details are still trickling in, but this is not a good look

Matt Barnes, a professional basketball player who once schlepped 95 miles in order to pummel a then-head coach his ex-wife was dating at her home with Barnes’ children in attendance, reportedly got into a serious dust up early Monday morning at a New York City club and is wanted for questioning.

Law enforcement sources tell us cops got a 911 call to Avenue Nightclub after midnight, reporting a man assaulting 2 women and another man. We’re told things got physical when Barnes allegedly choked one woman during an argument — and when 2 other people tried to intervene … he punched both of them.

The New York Post is further reporting that law enforcement sources said that the woman in question is “possibly a girlfriend” of Barnes’ and that the “two alleged victims were at a neighboring table when they tried to help.”

Barnes has been arrested for domestic violence before, an incident that also involved his ex-wife, Gloria Govan, though the charges were eventually dropped. In 2011, Barnes struck a player during a pro-am game, telling ESPN, “He elbowed me and pushed me, so he got one,” though he’d later say that it wasn’t a punch as much as it was a “shoving altercation” that had been “blown out of proportion.”

TMZ also published a shaky cell phone video of Barnes and his teammate, DeMarcus Cousins, discussing the incident and suggesting that he too may have engaged in physical violence. “Fuck, man, I done fucked my shit up,” Cousins says. “The nigga was trying to choke Matt; I hit the shit out this nigga.”

According to an additional report from TMZ, a single anonymous source provided a different account of what transpired, adding that Barnes sees himself as the “victim” here. His attorney too is hopeful that charges will not be filed

A rep for the NBA star tells us … Barnes was having a good time at Avenue Nightclub with his teammate, DeMarcus Cousins, when he went to sit at his VIP booth and accidentally “butt bumped” a woman who was at the next booth over.

Barnes claims the woman reacted by slapping him in the face, hard — and that’s when all hell broke loose.

Barnes claims the woman’s crew — which included several men — jumped in and began to get violent. Barnes was knocked to the ground in the melee and one of the men began to choke him.

Barnes and the Sacramento Kings are off until Wednesday when they’ll travel to Dallas to take on the Mavericks.