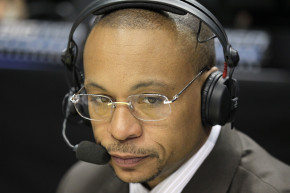 That’s some exciting unpaid football right there. Fox Sports’ Gus Johnson was tasked with handling the play-by-play duties for the game and normally, that’d be an equally fun choice, given his penchant for howling like a Red Bull-infused fanboy at the slightest provocation.

If you’re not familiar with his body of work, check out this fine YouTube clip, appropriately titled, “Gus Johnson Goes Absolutely Nuts, Orgasms All Over Broadcast During Iowa Touchdown.” Someone even went to the trouble of cobbling together an online Gus Johnson soundboard back in 2010, just so you could bang away on your keyboard and delight in all of his full-throated catchprases at your leisure. (Sadly, it’s been permanently shuttered, the URL sold to a Japanese purveyor of home testing kits for chlamydia.)

With three seconds left on the clock and McSorley trotting on to the field to take a knee and seal the win, Johnson decided that the moment required he sling some serious bullshit.

“With all that has happened with this program regarding the sexual abuse scandal, this is a reckoning, a revival, a regeneration, a milestone in the healing process,” he said, screwing on a John Facenda-serious tone of voice.

No, no, no, no, no, A sports team won a game, period. It has absolutely zero to do with the “healing process” of the children molested by Jerry Sandusky, never mind being a salve to Penn State fans and alumni that harbor lingering feelings of guilt. To suggest so is disgusting.

But beyond revulsion at Johnson’s deeply wrong commentary, it validates the idea that the football program is so central to Penn State’s existence and identity – particularly for a school that earns upwards of $510 million dollars per year in military and governmental research contracts – that history can be rewritten, evil deeds can be undone, and basic decency becomes a secondary concern. That’s exactly the kind of morally-bankrupt culture and retrograde thinking that allowed Penn State officials and coaches to turn a blind eye to Sandusky’s crimes and silence whistleblowers to begin with.

Further, whether Johnson intended to do so or not, it’s part and parcel of Penn State’s ongoing attempt to rehabilitate Paterno’s image, one that not only re-traumatizes the victims, but lets both victims and abusers know that a vocal subset of alumni and fans will sling baseless conspiracy theories and do everything in their power to shame and silence anyone that accuses someone in the football program of a crime, particularly when said crime is sexual in nature.

“When [victims] see grown ups automatically believing and backing those who may have enabled horrific damage, they are even less apt to call police and prevent more horror. It’s just that simple,” Barbara Dorris of the outreach director of SNAP, the Survivors Network of those Abused by Priests, said in a statement when Penn State announced they’d be presenting a video tribute to Paterno during the home opener.

“Enthusiasm about football… should never prod anyone to risk making even one victim of childhood sexual trauma feel even more hopeless and helpless, and suffer in silence rather than disclose who hurt them and perhaps stop one criminal from hurting other kids today.”

And that’s what Gus Johnson did.