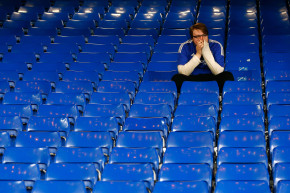 The growing child sexual abuse scandal in English soccer now includes a troubling new accusation from former first-team Chelsea player, Gary Johnson, who alleges that he was sexually assaulted by the club’s chief scout, Eddie Heath, in the 1970s—and that Chelsea later paid him £50,000 for his silence.

“I felt shame, I felt my childhood had been taken away from me,” Johnson told the Daily Mirror in an exclusive interview. “ . . . They didn’t want to be tainted. . . . They really didn’t want to admit or help myself for fear of being exposed.”

Heath died of a heart attack in the 1980s. Chelsea released a statement that read, “The club have retained an external law firm to carry out an investigation concerning an individual employed by the club in the Seventies, who is now deceased.”

Johnson told the Mirror that he approached Britain’s Metropolitan Police with his accusation in 2014, after the unit had established Operation Yewtree, an investigation into similar crimes created after claims against Jimmy Savile came to light. Johnson said he was told to “go back to Chelsea.” Chelsea is said to have waived the gag order of his agreement after details had leaked to the media.

When the Guardian asked the police to confirm the account, the police declined comment on the specifics and reiterated a prior statement: “The Metropolitan Police Service has received information relating to non-recent sexual abuse in football clubs in London. The Met will assess any information it receives and ensure that victims are given the advice and support they need.”

The CEO of Britain’s soccer governing body, Martin Glenn, said at a recent news conference, “We have clear rules in the game and if there’s any evidence of a breach of those—and hushing up would be one—when it’s our turn to apply the rules, we absolutely will, regardless of size of club.”

According to the Mirror, Former Chelsea star Alan Hudson has now come forward saying it was “common knowledge” that Heath was a “nonce,” British slang for pedophile, and that he was a “danger” to youngsters. The Telegraph reported that Heath apparently trained Barry Bennell, the previously convicted youth coach now facing new allegations, although “there is no suggestion that Bennell was a victim or even aware of allegations against Heath.”

Police officials have said that 350 new victims of abuse in soccer have come forward and that 17 forces are now investigating past accusations. A hotline created to report such claims has received 860 calls.

“All their fans deserve to know the truth about what went on,” Johnson told the Mirror. “I know they asked me to sign a gagging order and how many others are there out there?

“They may have paid others for their silence. I hope and pray no clubs are allowed to cover this up—no one should escape justice. We need total transparency now for the good of the game.”