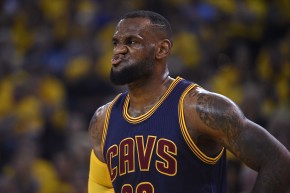 Because why should billionaires spend money when public officials cave to their demands?

Dan Gilbert, the Cleveland Cavaliers owner, Comic Sans aficionado, and accused subprime mortgage fraudster, wants some new exterior walls for his team’s arena. Said walls are currently made out of cement and Gilbert believes that glass would be a heck of a lot better.

The glass walls and other “upgrades” to Quicken Loans Arena will cost an estimated $140 million dollars. Because he’s a generous chap, Gilbert agreed to pay for half, but he would like it very much if Cuyahoga County handles the rest. One small glitch: Cuyahoga County still owes about a billion dollars’ worth of debt.

“At this point our credit card is maxed out,” Cuyahoga County Executive Armond Budish said in October 2015. “We cannot responsibly borrow at this point unless we have identified a revenue stream for the borrowing.”

Now, Gilbert and the Cavs, with a helpful hand from Budish, are turning to Destination Cleveland, a tourism promotion agency that’s funded by taxpayer dollars, to see if they might be willing to cough up the money. Funnily enough, the Cavs’ CEO, Len Komoroski, sits on the board, though he promises that won’t have any impact on Destination Cleveland’s decision.

Let’s do a bit of back-of-the-napkin math to see how this might work. Destination Cleveland receives $15 million dollars per year via a “bed tax,” a 1.5 percent tax levied on all hotel guests, that’s in place until 2034. Assuming the price tag for the precious glass walls don’t rise — and they always do —for the next 17 years about $4 million dollars, a little more than a quarter of Destination Cleveland’s total annual budget, would go to repaying the funds spent refurbishing an arena. That’s a lot!

Why is all this necessary, you might ask, especially considering the Cavaliers, along with the Cleveland Indians and Cleveland Browns, got $260 million dollars in 2014 via an extension of a tax on alcohol and cigarettes for various upgrades and improvements to their respective stadiums and arenas? (Gilbert asked for $65 million to fix the roof.)

“It is one of the oldest arenas in the league, which is hard for some of us to believe because it seems like it was just built,” Budish told cleveland.com in April when Gilbert first started going around hat in hand. “But the useful life of arenas is not considered to be all that long.”

Quicken Loans Arena, which was built in 1994, hosted the Republican National Convention this summer. There are no known reports of delegates, protesters, or any of the estimated 50,000 attendees remarking, “Boy, I wish there were walls made of glass. Then we could throw stones!”

Oh, and NBA Commissioner Adam Silver made it perfectly clear that if Quicken Loans Arena wanted to host All-Star Weekend they’d have to spiffy up the joint.

“We know [Cavaliers’ owner] Dan Gilbert would very much like it to happen and I think it’s just a function of when. Making sure that the timing is right in terms of the upgrades to the building,” Silver said in 2015 when teams were still submitting bids to host the 2017 and 2018 games. “It really comes down to when are the upgrades going to made to the arena.”

Cleveland was not chosen to host either game. According to Forbes, Dan Gilbert’s net worth is 4.8 billion dollars.