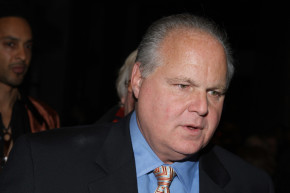 The perpetually racist shock jock is back at it again and, really, it's kind of sad to watch

It must be a somewhat difficult time for Rush Limbaugh. After decades spent spouting every single dog whistle known to man, Rush’s ability to send a decent chunk of the country into outrage-fueled spasms has been overtaken by the naked, overt bigotry of actual neo-Nazis.

Maybe that’s why he decided to break out one of his classic racist jams on Tuesday. It probably makes for a more coherent argument when taken in aurally, but he was whingeing about Doris Kearns Goodwin’s recent appearance on CNN. The noted historian and author was pointing to Hillary Clinton’s failings as a “storyteller,” especially in comparison to the president-elect, trying to suss out what—aside from a bungled, lousy campaign—had gone so horribly wrong.

So Limbaugh went plunging down the down the rhetorical rabbit hole, grumping about the lack of adversity that President Obama had endured, which somehow led him to this jejeune recollection. (Transcript via The Rush Limbaugh Show.)

C’mon Rush. That’s it? You think you can generate a slew of angry headlines and all-caps tweets with this tired, old routine? In case you missed it, way back in November 2004, he blamed the ugly brawl between players and fans known as “The Malice in the Palace” on “hip-hop culture.”

And that comes right out of the hip-hop culture, and it’s not just that. You look at NBA players and the uniforms, you don’t have to go back very far. The uniforms have changed totally. They’re now in gang colors. They are in gang styles.

Two weeks later, he was back at it again, suggesting that the NBA rename itself the “Thug Basketball Association” to aid its marketing efforts

I mean you ever been to an NBA game? What happens is, I guess the same way in college, you go to an NBA game, the visiting team, when it’s time to announce the visiting time the public address announcer whispers and goes through the five names of the starting lineup in about 20 seconds, and after every name, the local thugs’ fans start booing and throwing things and then when it’s time to introduce the home thug unit, the home gang, the lights go down, and this ear-splitting music and fireworks go off inside the building and so forth, because the rival gang that’s in town knows it’s on enemy turf. It’s on enemy turf, and you set the stage.

But if you tell everybody who you are, you’re the TBA, the Thug Basketball Association and start calling these teams “gangs,” and, you know, get the appropriate colors on the uniforms and so forth, you can watch this league come back to the prominence and so forth that it once had.

In 2009, shortly before the NFL made it clear that Limbaugh wasn’t a welcome addition to a potential St. Louis Rams ownership group, he said basketball was the “favorite sport of gangs,” but it’s been a while since Rush has said racist crap about basketball players. Maybe he sort of gets that the NBA hasn’t been at the center of the culture wars for a while now, and his aging, white, male audience of dittoheads aren’t tuning in because they’re scared of Allen Iverson’s cornrows.

So, Rush, we will not accede to your wishes headline-wise. Not for tepid trolling that’s been recycled from a very different time and place in history, and even at its peak was really just a desperate plea for attention from the mainstream media you claim to have spent a lifetime battling. We hope he’s cool with our editorial choice.