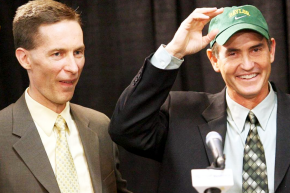 Ian McCaw, formerly of Baylor, is now a part of the Falwell family's Liberty University, which makes perfect sense

In explaining his controversial hire of former Baylor athletic director Ian McCaw to the same post at Liberty University, school president Jerry Falwell Jr. said, “I can’t think of an athletic director in the country who is more sensitized to the importance of complying with the intricacies of Title IX than Ian McCaw.”

This might be true if McCaw learned anything while in charge of Baylor’s athletic department because his former employer is currently facing four Title IX lawsuits. While in that post until May, there were, as the Wall Street Journal reported, “17 women who reported sexual or domestic assaults involving 19 [football] players, including four alleged gang rapes,” all in the previous five years.

Baylor retained the law firm Pepper Hamilton to investigate its Title IX responses, and the firm found a “fundamental failure” to implement safeguards protecting women. Among the specific findings were “failings within both the football program and Athletics Department leadership, including a failure to identify and respond to a pattern of sexual violence by a football player, to take action in response to reports of a sexual assault by multiple football players, and to take action in response to a report of dating violence.”

Also, Pepper Hamilton wrote, “The choices made by football staff and athletics leadership, in some instances, posed a risk to campus safety and the integrity of the University. In certain instances, including reports of a sexual assault by multiple football players, athletics and football personnel affirmatively chose not to report sexual violence and dating violence to an appropriate administrator outside of athletics.”

Soon thereafter, Baylor’s Regents took disciplinary action against McCaw; a release said he was “sanctioned and placed on probation” on May 26. Four days later, he announced his intention to resign.

Falwell also said of McCaw, “His decision to resign was his own choice. It was in no way a forced resignation or firing. If he made any mistakes at Baylor, they appear to be technical and unintentional, out of line with an otherwise distinguished record. He is a good man who found himself in a place where bad things were happening and decided to leave—and now Liberty is the beneficiary.”

But just earlier this month, Baylor’s former Title IX coordinator, Patty Crawford, said in an interview with ESPN’s Outside the Lines that the football program had a “real culture of gang rape” and that McCaw allegedly tried protecting players. “The athletic director asked if I could give immunity to the football players that still were at the university,” Crawford told OTL.

McCaw is also one of the defendants (along with former football coach Art Briles and Baylor’s board of regents) in a lawsuit filed by a former Baylor student named Jasmin Hernandez, who alleges, among other accusations, that the co-defendants were negligent in implementing Title IX safeguards.

“You have this athletic director who is either incompetent to the way he supervised his program, or worse, I would argue, turned a blind eye,” Alexander Zalkin, Hernandez’s lawyer, told the Washington Post.

About a week later, however, Baylor posted a statement regarding a sexual assault allegation in which a victim came forward in 2013. The release described McCaw not reporting the information despite the fact that, “once informed of the report, athletics personnel may not exercise discretion to not report.” Furthermore, the university said:

In early 2015, Baylor’s Title IX Office first learned of the sexual assault allegation in connection with three other reports of sexual assault involving multiple football players. At the time, the Athletic Director was asked if he had any prior knowledge of an alleged gang rape within the football program. He denied having any knowledge of the alleged incident. Later in 2015, for the first time, the Athletic Director acknowledged that the student-athlete’s head coach told him about this report in 2013. The Athletic Director explained that he did not take any action, including reporting the alleged sexual assault to Judicial Affairs, because he thought the victim did not want to report the incident.

Several football assistant coaches from the time disputed the account in a statement posted on Twitter (by Briles’ son, among others), saying, in part, that McCaw instructed the coach to report the incident to Judicial Affairs, which is said to have happened.

Falwell gave a similar telling of those events and then said, “There will be time, no doubt, for Ian and his attorneys to address questions about what happened at Baylor but we don’t intend to litigate those facts in the press.”

Instead, Falwell circumvented the media and even the rest of his athletic department, as ESPN reported that no senior athletic officials even knew the identity of their new boss until McCaw walked through the door of his press conference.

And now here’s Falwell one final time: “We are completely satisfied that Ian McCaw is a good man and a great athletic director.”

Baylor’s teams may have won when McCaw was there, but an AD is the CEO of that troubled department. Accountability starts at the top and McCaw carries much of it despite facing virtually zero consequences of note thus far.