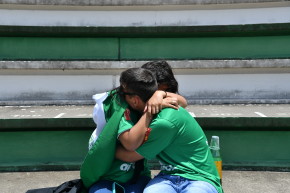 With nearly the entire team dead, the club's league counterparts are already spurring the rebuilding process

Amidst the series of social media posts extending thoughts and prayers, there’s been a series of tangible and substantial gestures proffered to Chapecoense, the Brazilian soccer club on board the charter flight that crashed in the Colombian hills late Monday night and left 75 of the 81 on board dead.

Chapecoense was set to play Atletico Nacional in the first match of the two-leg Copa Sudamericana final. Atletico Nacional has since petitioned CONMEBOL, the governing body, that the championship be canceled and “that the Copa Sudamericana title be handed to Chapecoense Football Association as an honorary trophy for its great loss, and as a posthumous homage to the victims of the fatal accident that has put our sport in mourning.”

Only three players survived the crash—Alan Ruschel, Jackson Follmann and Hélio Neto, each of whom reportedly suffered severe trauma injuries—while one other player remained home in Brazil because of an injury. Reuters reported that Neto was in the intensive care unit, where he was in “very delicate but stable” condition with trauma to his head, thorax, lungs, and knees while Ruschel was also in the ICU but stable; Follman’s condition was not yet known.

In light of that, Chapecoense’s Brazilian league rivals have stepped forward to help the club rebuild.The other clubs have offered to loan players to their tragedy-stricken opponent, free of charge, for the 2017 season and have asked that Chapecoense be spared relegation to Series B for three years.

“It is a minimum gesture of solidarity that is at our disposal,” the statement read, as translated by the New York Times. “But it is endowed with the sincere objective of reconstruction of this institution that Brazilian football has lost.”

Chapecoense has been an unlikely underdog in Brazilian soccer, having risen from the country’s fourth tier as recently as 2009 to play in the finals of the continent’s second-biggest club tournament.