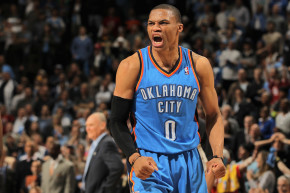 Russell Westbrook Is Averaging A Goddamn Triple-Double
By Robert Silverman

Look at that headline, just look at it

Russell Westbrook, man. We knew coming into the season that Kevin Durant’s exodus to the Oklahoma City Thunder meant huge doses of Fully Operational Death Star Russ, the ball-dominating, ungodly terror that was unleashed during at the end of the 2014-15 season when Durant’s nagging foot injuries and subsequent season-ending surgery meant Westbrook had the stage all to himself.

During that 25-game stretch Westbrook banged home 31.6 points on 24.8 shots per game while snagging 8.8 rebounds and dishing 9.6 assists though his shooting percentage did tumble all the way down to .411. Now, after dropping 27 points, 18 rebounds, and 14 assists on the Knicks, he’s averaging a triple-double over the first 19 games of the season.

Want more? That’s his third triple-double in a row and his eighth triple-double this year, tying LeBron James for the sixth most triple-doubles in the history of the NBA with 45. In October, he became the first player since Kareem Freaking Abdul-Jabbar in 1975 to score 50 or more points while racking up double-digit assists and rebounds. It’s the Knicks, so break out the Morton’s salt, but on Monday, Westbrook came oh-so close to putting up a triple double before the half, it only took 79 seconds into the third quarter before he netted his tenth dime, clocking in as the second-fastest triple double ever.

Of course, all these boffo, ever-mounting numbers means that Westbrook has a legit shot at becoming the first player to average a triple-double over the course of an entire season since Oscar Robertson in 1962. Yes, comparing eras, even using the most sophisticated, fine-tuned metrics, can often be an exercise in futility. But leaving aside the belief held by Robertson, Wilt Chamberlain, and others that long after the league’s color barrier had been broken, owners maintained an “unwritten rule” limiting the number of African-Americans on any given roster, one stark difference is that the pace of the game has dramatically slowed. We’re beyond the late 90s to early 2000s grab-tastic slogs, but plug Westbrook into Robertson’s era, and watch the digits start spinning like a broken slot machine.

Adjusted for Oscar's possessions, Westbrook would be averaging 46.6 points, 17.0 assists and 15.6 rebounds.

The Thunder won 112-103, lifting them to 11-8 on the season. Triple-doubles or not, hanging around in the second tier of the Western Conference playoff race will require heaps of  Westbrook being Westbrook, even if it means potentially shattering Kobe Bryant’s record for usage rate. Luckily, head coach Billy Donovan seems cool with it, as long as the team keeps notching victories, that is.

“You can’t always expect to get numbers and win,” he said after the game. “It doesn’t work like that. There’s more to it than that. The thing I’m encouraged by is when he does what he did tonight and we win. Does what he did against Detroit and we win. There’s certain times when [a player] goes off and gets crazy numbers, and his team loses. Winning is the most important thing to Russell. And he knows that his assists, his rebounds and his scoring, being efficient, helps our team win.”

Here’s the thing. Last night, Westbrook did exactly that. The Thunder came out on top (though, again, the Knicks) not because of Westbrook’s isolation-based, rampaging charges at the rim. He took what the defense gave him, wrecked the Knicks on the glass, and found the open man again and again, often threading passes through seemingly nonexistent holes. Regardless of whether or not it’s a worthwhile conversation to have, (it isn’t) the questions about whether Westbrook is a “pure” point guard will continue to dog him — and there’s a whole other debate to be had about why he’s still considered a good defender — but there’s no other 6’4″ dude around that crash the boards like this.

It’s beautiful. Here are some more outstanding highlights. Watch them with a loved one, or feel free to enjoy them by yourself in the comfort and safety of your own home.