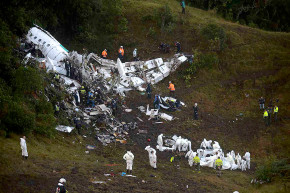 Authorities report that six of the 81 on board have survived

The upstart Brazilian soccer club Chapecoense was en route to Colombia for its first Copa Sudamericana final appearance when its chartered plane crashed in the hills near Medellin on Monday night, killing 75 of 81 on board.

Three players—Alan Ruschel, Jakson Follman, and Helio Hermito Zampier (known as Neto)—as well as two crew members and one reporter survived. The flight included nine crew members and 72 passengers, which included players, coaches, and 21 journalists. Authorities in Colombia told reporters that one other person, a goalkeeper named Danilo, had been found alive in the wreckage but later died from his injuries.

Colombia’s civil aeronautics administration posted this list of the survivors.

The club had been on board a British Aerospace 146 short-haul charter operated by LaMia, which signaled an emergency at 9:54 p.m. local time apparently due to an electrical failure, according to an ESPN FC report citing aviation authorities. The tracking site Flightradar24 said on Twitter that the plane last signaled from an elevation of 15,500 feet and 30 kilometers (18.6 miles) from its destination in Medellin, which sits about 7,000 feet above sea level.

This photograph captured the club before it boarded.

One other Chapecoense player, Alejandro Martinuccio, was not on the flight because he was not fit enough to play in the match. “I was saved because I got injured,” he told Argentina’s La Red radio. “I feel profound sadness. The only thing I can ask is prayers for the companions who were on the flight.”

Chapecoense was a small-town, small-payroll success story who had been stranded in Brazil’s fourth division less than a decade ago but was set to play Atletico Nacional in South America’s version of the Europa League. The club hails from Chapeco, a modest city of 200,000 whose 22,000-seat stadium was deemed too small to host the home portion of the series, prompting a relocation to a larger venue 300 miles north.

The cash-strapped club looked up to England’s Leicester City as inspiration, a comparison that Chapecoense coach Caio Júnior acknowledged two months ago. “Our team really reminds me of Leicester, a team from an unfancied city that was able to win an important title,” Júnior said, according to the Guardian. “I want to make a mark this season with this club, this group of players.”

Leicester was among the Premier League clubs to offer its condolences.

Our thoughts are with everyone at @ChapecoenseReal and all those affected by the tragedy in Colombia.

The Brazilian government declared three days of national mourning. Chapecoense vice president Ivan Tozzo, who had not traveled with the team, told Brazilian cable channel SporTV (per the AP), “There are a lot of people crying in our city, we could never imagine this. Chapecoense is the biggest reason for joy here.”

Brazil’s biggest soccer star, Neymar, who plays for Barcelona FC, was among those to offer his prayers over Twitter.