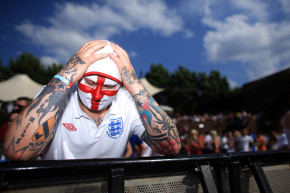 The Child Sexual Abuse Crisis In English Soccer Is Getting Worse

A former youth development coach for several clubs, Barry Bennell, who has been convicted three times for more than two dozen counts against eight children, is at the center of the scandal, which has since broadened after one of Bennell’s victims, Andy Woodward, bravely stepped forward to share his harrowing tale of depression, anxiety, and suicidal thoughts. (UPDATE, Nov. 29: Prosecutors charged Bennell with eight new counts of sexual assault against a boy under the age of 14; police also reported that Bennell was found unconscious at a hotel this weekend and hospitalized in a “fear-for-welfare incident.”)

In a long interview with the Guardian earlier this month, Woodward said:

“My life has been ruined until the age of 43. But how many others are there? I’m talking about hundreds of children who Barry Bennell cherry-picked for various football teams and who now, as adults, might still be living with that awful fear.

“We’ve seen with the Jimmy Savile case how people have had the courage, yet I’d say within the football world it’s even harder to speak out. Only now, at the age of 43, I feel I can actually live without that secret and that massive, horrible burden. I want to get it out and give other people an opportunity to do the same. I want to give people strength. I survived it. I lost my career, which was a massive thing for me, but I’m still here. I came through the other side. Other people can have that strength.”

Since that interview, more than 20 victims from at least six clubs have come forward with allegations against Bennell and at least one other coach, too. Four police departments have opened investigations. The Telegraph reported that “top football clubs made secret payments to buy the silence of young players sexually abused by coaches.”

While the FA has appointed experienced independent counsel to lead its investigation—the AP noted that the lawyer, Kate Gallafent, “has experience working on child protection issues in sports”—one member of Parliament criticized the organization for not acting more quickly and wants the investigation to pursue whether there are problems with “the whole culture of football.”

Culture, media and sport committee chairman Damian Collins told the BBC, “This internal review needs to go much wider. They need to make it clear that this is a full investigation, the person leading it can take it in whatever direction they want, that anyone in football who is called as a witness is compelled to give evidence.

“I think, crucially, it shouldn’t just investigate individual allegations made in the past, but ask the question, ‘Should people in football have known more?’”

Indeed, a former board member at Crewe Alexandria named Hamilton Smith told the Guardian that he reported suspicions of Bennell in the late 1980s but the coach was allowed to remain in his post.

Parliament’s former minister of sport, Richard Caborn, told the BBC there were “real concerns” with the protection of young players as far back as 2001, saying he sought a whistleblower hotline and other independent protections though nothing came to fruition.

Such a pattern of abhorrent inaction by an organization is hardly new—Penn State football, the Catholic Church, etc.—and it’s time the FA spares no expense and hides no evidence in this investigation.