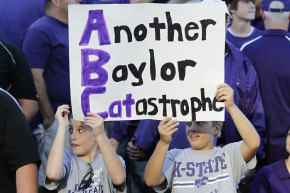 With a lame-duck coaching staff putting no effort into recruiting, the next coach is starting from scratch

Reports and rumors swirled last week that Baylor is on the verge of hiring SMU coach Chad Morris to replace the disgraced Art Briles, but with the college football coaching carousel officially spinning at full speed, reporters with itchy trigger fingers have fired off a few reports that didn’t or have yet to materialize, with “Morris to Baylor” leading the way.

While it’s unclear if Morris is still the frontrunner, he has a resumé similar to the one Briles had when Baylor hired him in 2008. Morris was a highly successful Texas high school football coach who has resurrected a Group of Five program in the state, and if he ends up at Baylor, he’ll get a shot at the big time as head coach at a school that’s turned itself into an athletics-first university over the last 20 years.

While the next coach may find the necessary resources, facilities, and enthusiasm still in place to be successful at Baylor, here’s something the soon-to-be millionaire won’t find: a 2017 recruiting class. That’s because the current coaching staff lead by Jim Grobe has put almost no effort into recruiting. Why bother? The current staff won’t be working for Baylor next year as they are a stopgap measure put in place thanks to Baylor’s ongoing string of sexual assault cases and the university’s role in covering them up. One result of the ongoing fallout is that football recruiting has all but ceased.

“There have been only a couple to a handful of offers made in the past several months, rather than the usual dozens you would see under normal circumstances,” said Gabriel Dargan Brooks, a high school football recruiting analyst for Scout.com. “I do know that prospects have gotten some form letters and game invitations and material like that, but I’m not sure if the usual volume has gone out. To my knowledge nobody on the staff is actively recruiting anybody because it’s assumed the staff turnover will be complete in the very near future.”

With one of Baylor’s recruits decommitting over Thanksgiving, the Bears are down to a grand total of one commitment for its 2017 class and is ranked 121st in the nation on Scout.com behind the likes of Charlotte, Buffalo, South Alabama, and Kent State. Rivals.com doesn’t have Baylor listed in its top 100 teams for 2017, and ESPN doesn’t have Baylor listed on its top 40.

It’s hard to find precedent for a football program of Baylor’s stature effectively not recruiting for six months. LSU, which fired Les Miles after four games this year, is ranked 9th by Scout.com with 18 commitments despite having an interim coach in Ed Orgeron, the difference being that Orgeron, now the full-time coach, was basically auditioning to have the interim tag removed from his title while Grobe knows for a fact he won’t be at Baylor next year.

After Joe Paterno was fired at Penn State in the wake of the Jerry Sandusky scandal in November 2011, the school was without a permanent head coach until it hired Bill O’Brien on Jan. 7 the following year, leaving a two-month gap where the team didn’t have long-term leadership. But by that point Paterno was more of a figure head than a head coach, and he certainly wasn’t overly involved in the recruiting process. While the scandal led to a rash of decommitments, the rest of the coaching staff was still working during the gap to salvage the 2012 class, which O’Brien managed to do.

This is a testament to the recruiting process being fluid even in the face of a crisis that one would assume to be crippling for any program. The fact is that players commit, decommit, and recommit all the time. Further, the bright shiny new football stadium and athletic facilities at Baylor will inevitably sway kids whose next best choice is an also-ran such as North Texas, New Mexico, or Louisiana Tech, even with the sexual assault scandal tarnishing the school’s “brand,” such is the unfortunate reality of sports in general.

To replicate Briles’ success, the recruiting bar is actually not that high as Briles didn’t build Baylor with blue-chip prospects during his tenure. Baylor didn’t crack the top 30 in Rivals’ recruiting rankings once, and was more often than not somewhere in the 40s. He signed the type of good-not-great players who get overshadowed by the wealth of five-star players in Texas that draw national attention. Seth Russell, Baylor’s Week 1 starter at quarterback the past two years, was a three-star prospect who was only lightly recruited by other schools after a good-not-great high school career in Garland, Texas, just east of Dallas, but when healthy he’s has been a catalyst for Baylor.

Then there’s Morris, who despite the delay is probably still in the running to be the next head coach. Morris has deep ties in the state having coached high school at iconic Texas programs Stephenville (where Briles came to fame) and Austin Lake Travis, a perennial state-title contender that’s churned out FBS quarterbacks for the better part of 20 years, names such as Drew Brees, Nick Foles, and Baker Mayfield.

At SMU, Morris has recruited exclusively in Texas, just as Briles did at Baylor. If he gets the job, Morris will likely bring some of the kids who’ve committed to SMU with him. Morris is a well-liked coach among Texas high school football coaches, who often serve as gatekeepers to the players they groom for the next level.

“I think if a good hire is made, salvaging a solid recruiting class is definitely possible,” Brooks said. “The primary obstacle is obviously time and familiarity. However, if the guy is somebody such as Morris, he will have already been recruiting these types of players at SMU, which has done a great job of over-recruiting, so to speak, from a talent standpoint.”

Baylor deserves to be in this spot after its grotesque handling of the football team’s systemic sexual assault problem, but get your kicks in now because there’s a chance that will change.