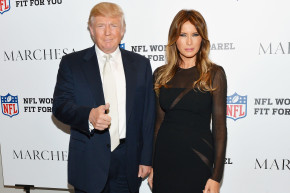 President-elect and former failed sports franchise owner Donald John Trump is fond of dishing out the occasional hot football take. On multiple occasions during the campaign, he’s said the modern NFL has become “soft.” Back in the good ol’ days, players’ brains were mashed till they resembled guacamole, and in Trump’s addled thinking, that was a good thing.

There’s no point in taking any of the things he says — a constantly-shifting word salad of half-truths thrown together not by any coherent ideology, but rather a desperate, ceaseless desire to draw attention to himself — at face value. Still, given some of the revanchist goons that he’s surrounded himself with, many of Trump’s most terrifying promises will come to fruition.

With that in mind, the New York Daily News got Ann McKee, a researcher at Boston University and the director of the school’s CTE Center at the Boston University School of Medicine, on the blower. Like a vast swath of the population, she’s more than a little bit concerned.

Speaking of climate change, pay no attention to the supposed “softening” from Trump or willingness to keep an “open mind,” he expressed in a sit down with the New York Times on Tuesday. He’s 1) trying to please the person in front of him and 2) on Wednesday, a senior Trump campaign advisor told the Guardian that they’d be eliminating NASA’s entire climate research program. The advisor also lied about the number of environmentalists that think humanity’s impact on the climate is still up for debate and labeled it “politicized science,” even while global sea ice appears headed for the endangered species list.

OKAY. GREAT. FINE! That’s a giant glop of catastrophic, extinction-level toothpaste that can’t ever be crammed back into the planetary tube, but let’s get back to football and brain trauma. Somehow that’s less frightening.

McKee explained that her research is dependent on cobbling together scarce funding from a wide variety of sources including the National Institute of Health, the Veterans Administration, and private interests like the NFL, all of whom are subject to influence from and a desire to curry favor with whichever party controls the White House and Congress. (While we’re here, the NFL reportedly wanted to place a large finger on the scale in exchange for its largesse and often resorts to the same “the science isn’t settled!” language as climate change deniers.)

“This is an orphan disease,” she said. “I don’t know if it’s because of the political ramifications, or the financial/big business ramifications, but this disease has no home. I’m constantly scrambling for support.”

Further, while stories about football players dying or struggling to live while battling depression, memory loss, and wild mood swings receive the large-font headlines, research into potential diagnostic tests could positively impact amateur athletes of all ages and the military, a benefit to which the public remains largely unaware.

“Everyone doesn’t realize it’s not being taken care of,” she said. “We need widespread support, philanthropic support. We’re just not getting public support.”

Here’s an idea. Since Trump will absolutely believe and ape the words of the most recent human he’s heard from, maybe find a way to get “great guys” and “winners” like Bill Belichick and Tom Brady in his ear and hope they’ll tell him to drop all of this anti-science, faux-Alpha Male nonsense when it comes to football and CTE. Probably not.