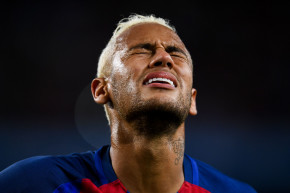 Prosecutors in Spain announced on Wednesday that they are seeking a two-year prison sentence and $10.6 million fine for Barcelona FC star Neymar on charges related to his controversial transfer from the Brazilian club Santos in 2013.

This makes him the sixth current or recent Barcelona player to be investigated in Spain for financial crimes related to taxes or fraud, joining Lionel Messi, Javier Mascherano, Adriano, Samuel Eto’o, and Alexis Sanchez. A seventh, Dani Alves, appeared on a list published by Spanish authorities for owing unpaid tax money. Neymar has his own tax problems in Brazil; in September 2015, local authorities seized $48 million worth of his assets and in March he was fined $52.1 million in fines and back taxes.

Messi and Mascherano were both convicted but had their prison terms suspended because, under Spanish law, sentences of less than two years can be served as probation. The other cases remain open. Neymar’s parents manage his business interests and are also under investigation.

Neymar, who has denied wrongdoing, would also presumably be spared prison time if convicted, given the length of the term sought. His case arose from irregularities during the transfer in which Brazilian investment group DIS, which controlled a 40-percent stake in the fee paid to Santos for Neymar, said it was stiffed on the full amount.

Initially, Barcelona reportedly paid €57.1 million for the transfer, with €40 million going to the company owned by Neymar’s family and Santos receiving €17.1 million, of which DIS received 40 percent, or €6.8 million. Spanish authorities, however, later determined that Barcelona had actually spent more like €83.3 million in all, which led to DIS’ complaint.

Barcelona already paid a fine to Spain’s tax authorities in June to settle a tax dispute related to the transfer, and its former club president, Sandro Rosell, is also facing fraud charges. Rosell resigned his position in 2014 as a direct result of Neymar’s transfer. He denied wrongdoing but didn’t want to be a distraction, saying in part, “From the beginning I have said that the signing of Neymar Jr has been correct and his signing has caused despair and envy in some of our adversaries.”