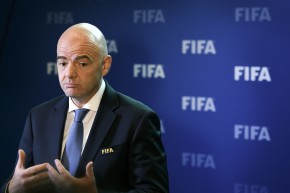 Human Rights Watch would like it if the Israeli Football Association and FIFA would stop assisting in the violation of human rights, and is asking the United Nations to take action.

On Monday, the non-governmental organization penned a letter to Zeid Ra’ad Al Hussein, the United Nations High Commissioner for Human Rights, in which they request that FIFA be added to a list of businesses currently situated in the disputed West Bank settlements, as per a recent U.N. Human Rights Council resolution.

According to Human Rights Watch, by continuing to host games in the West Bank with the approval of the IFA and FIFA, “Settlement football clubs provide part-time employment and recreational services to settlers, making the settlements more sustainable, thus propping up a system that exists through serious human rights violations.” As such, they, “inherently contribute to abuses such as restrictions on freedom of movement, unlawful seizure of land, unlawful exploitation of natural resources, discrimination, and restrictions on economic and educational development.”

Those services are only provided to Israelis and not to Palestinians, who not only are barred from playing on Israeli clubs, but aren’t allowed to buy a ticket in a part of the country that Human Rights Watch says was “unlawfully seized from Palestinians.” Further, without the financial support of local government in settlements, the clubs would find it difficult to stay in business.

“In most cases, the clubs receive the majority of their funding from the settlement municipalities and regional councils, which essentially pay them to organise sports and recreational services for Israelis only.”

For its part, the IFA told Human Rights Watch that the settlement clubs shouldn’t be “discriminated” against and that it was a “political issue.” FIFA, too, is “working intensely on this matter,” via a monitoring committee which will reveal its results in time, hopefully before the committee dissolves in March 2017.

While not going so far as to make a formal demand from the IFA and FIFA, they do recommend moving all future matches from the disputed territories. If that’s not logistically possible, then the IFA should boot them from the league, neither of which will occur.

The letter Human Rights Watch can be read in its entirety here, and a more detailed investigation into the IFA and FIFA’s activities in the West Bank can be found here.