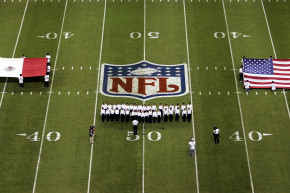 Maybe this wasn't the best idea

Lasers and slurs are admittedly odd bedfellows—a futuristic technology and neanderthalic thinking—but they emerged on Monday night as visible and audible impediments to the NFL’s plans of turning a game in Mexico City into an annual event.

What wasn’t captured by ESPN’s cameras and microphones are also significant: the high altitude—7,280 feet, which is 2,000 feet higher than Denver—and the pollution at El Estadio Azteca have a “devastating” effect on the body, making the venue the “worst place to ever play a sporting event,” as former U.S. soccer player Eric Wynalda told USA Today.

The NFL first played there in 2005 but hadn’t returned until this week’s Texans-Raiders tilt was played before 76,743 fans. The game itself was entertaining—a 27-20 victory by the Raiders, who served as the nominal home team—but the two enduring memories for the game were a green laser pointer frequently shown in the face of Texans quarterback Brock Osweiler and a homophobic chant that could be heard on the broadcast.

Fans have used the laser at Azteca Stadium before, most notably (to American audiences) when it was shone at U.S. goalkeeper Tim Howard at a game four years ago. On Monday, the green beam appeared to target Texans players and Osweiler in particular. He still completed two-thirds of his passes, 26 of 39, but said afterward that the laser was very apparent.

“I’m still gathering information on what exactly took place, but all I know at this point is when we were out there on the field on offense, there were multiple times I saw a green laser coming from the stands,” Osweiler said, according to the Houston Chronicle. “There was a couple of times it definitely hit me in the eye. And it was very noticeable.

“I never want to say one thing is a difference-maker, but certainly, having a laser zoomed in on your eyeball definitely affects how you play a game.”

Furthermore, the Azteca crowd could be heard chanting the word “puto,” which is a gay slur commonly heard at soccer games there. OutSports reported that the NFL reached out to stadium officials before the game in hopes it could be curbed. FIFA has fined the Mexican national team for its use, but Mexican Football Federation secretary general Guillermo Cantú has previously argued in its defense, claiming—incredibly—that it is not homophobic, discriminatory, or derogatory, even though it is all of those things.

All major sports leagues are trying to capitalize on a lucrative international market. That’s why Major League Baseball holds the quadrennial World Baseball Classic and why the NBA sponsors local outreach in China and India, among other countries. Further, the English Premier League just inked a three-year television contract in China for $700 million.

The NFL has been playing annually in London for a decade, with three games per season now. Mexico City is a tantalizing option, given its 22-million metro population and Central Time Zone location. There wouldn’t be the same travel demands as happens when crossing the Atlantic Ocean—which is especially burdensome for West Coast teams—so there are a lot of good reasons to try making Mexico work.

“I’m optimistic we’ll be back,” NFL commissioner Roger Goodell told ESPN. “We’re going to get to work right away on this … This is a priority for us. We see the passion that’s happening here and the fan’s interest in this game continues to explode. We want to feed that. … We want to continue that relationship and be back for more.”

To keep this tradition alive, however, there needs to be a better game environment: the NFL can’t easily minimize the pollution or the altitude—the aerobic demands of football are different than in soccer anyway—but the league can make strides in purging lasers, slurs, and everything in between.