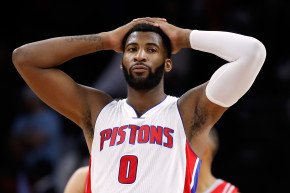 The Detroit Pistons’ Stadium Move Is Just Another Scam

It's almost like all sports stadium moves are huge scams?

In a press conference to be held today at 3 p.m., the Detroit Pistons are expected to announce that the team will be moving to the unfinished Little Caesars Arena for the 2017-18 season, fleeing their current suburban home, the Palace at Auburn Hills, according to multiple reports.

Located in downtown Detroit and a short hop skip from the Detroit Tigers’ and Detroit Lions’ respective stadiums, Comerica Park and Ford Field, Little Caesars Arena is the brainchild of Tom Illich, whose portfolio includes the Red Wings, the Tigers, a terrible pizza chain, and more. Part of a major investment and development effort, it will be surrounded by a bevy of nice retail options, housing, hotels, and whatnot, all because Illich had to move a few blocks from the perfectly fine Joe Louis Arena, and heck, he could swipe more than few tax dollars and other nice incentives in the process. (We’ll get there in a sec.)

The Downtown Development Authority, the city agency tasked with making this deal happen, recently upped the arena’s estimated price tag from $450 million dollars back in 2012 to $732.6 million dollars. According to the Detroit Free Press, the Pistons’ decision to join in on the fun was part and parcel of the reason for the increased costs, what with the need for their very own practice facility, plus a few tweaks to the stadium itself and a reworking of the locker rooms to accommodate both sports.

The extra $106 million will be paid by Illich, but he’s still getting a really sweet deal. Though his Olympia Development LLC spent millions buying up private lots, the Detroit City Council paid him a grand total of $1 for 39 parcels of public land, making it “one of the largest land transfers in the city’s history,” while relieving Illich of the burden of paying property taxes.

That’s not all. The DDA also agreed to spend $284.5 million tax dollars that were previously dedicated to the Detroit Public School system to defray the bond costs. While Illich and every owner and politican rubber-stamping these public-private partnerships will proudly declare that “no new taxes” were spent making this wonderful arena happen, it’s not true.

“For the first time in nearly two decades, the property taxes in Detroit were finally going to the right place, the schools,” Senate Minority Leader Gretchen Whitmer, a democrat representing East Lansing said when the bill approving this boondoggle was passed in 2012. “Now they’re swooping in on school taxes to help pay for a hockey arena in Detroit.”

What’s to become of the soon-to-be-vacant Palace at Auburn Hills? Oakland County doesn’t want to buy it from Pistons’ owner Tom Gores, with the likely result being it’ll get bulldozed and sold off to developers. But even if Gores does take a bit of a hit, as long as the merger of his Palace Sports & Entertainment company with Olympia Entertainment occurs as rumored, he’ll come out on top, especially with the profits earned by a mega-entertainment complex which is as much about luring people to spend money on anything but sports as it is “jobs” and “economic growth.”

We’ll update this story if today’s presser yields any new information, but it probably won’t.

UPDATE: In order to make Tom Gores’ dreams a reality, the DDA will be kicking in “34.5 million in additional bond proceeds” pending approval in March by the DDA and city council. For their part, the Pistons will donate, or, “invest” $2.5 million dollars over the course of six years to fix up 60 Detroit basketball courts and give away 20,000 tickets per year as part of a “10-point community benefits plan.” Sure, that seems like a fair tradeoff.