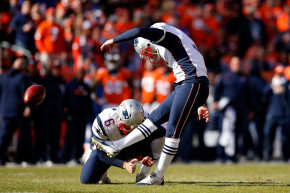 For once, Roger Goodell's best laid plans actually worked out

The best thing about Week 10 of the NFL season was a bunch of kickers failing to perform the easiest part of their job: converting extra points.

12 extra points missed today are the most in a single day in NFL history, according to @EliasSports!

The 12 doinked kicks marks the most misses in a single week NFL week ever, breaking the previous mark of 10, set in 1985. This represents an outlier, to be sure, but one whose conditions were made by design. Rule changes enacted prior to the start of the 2015 season which moved kickers back to the 15 yard line from the two yard line were done so because no one was particularly interested in watching a part of the game that had become a near-certainty.

It’s not often that we here at False Start find ourselves nodding in agreement with Roger Goodell, but throwing a wrench into the dull, repetitive, “player scores touchdown, commercial, extra point, commercial, kickoff, commercial” dead zone is exactly what he had in mind and it’s working. During the 2014 season, extra points were knocked through the uprights 99.3 percent of the time. Last year saw a precipitous drop, all the way down to 94.2 percent, a figure that’s held stead steady at 94.8 percent through week 10. Meanwhile, more and more teams are throwing caution to the wind and going for two. That’s fun!

While the mathematical probabilities continue to tilt towards attempting a two-point conversion regardless of score or game situation, we’re far from some promised football utopia where kickers are relegated to field goal attempts and kickoffs. (Considering the dangers posed by kickoffs, the truly radical move would be to eliminate them altogether, as opposed to a few tweaks that upped the number of touchbacks.)

As The Ringer noted, NFL coaches tend to be a small-c (and capital-C) conservative bunch. Very few possess the kind of long-term job security and status necessary to weather what would surely be a barrage of Monday morning quarterbacking if they were to completely ditch kicking extra points. No matter how much properly-crunched data would be held up to defend losing a winnable game or two, it’s the kind of risk that’ll lead to pink slips not just for the clipboard-holder, but many a front office type that made the hire in the first place. That is, assuming you can convince one of the most storied, celebrated head coaches around to admit that he ever utilizes fancy metrics at all, regardless of whether or not that’s true.

And if you’re up for a bit more fun, take a look at Belichick’s befuddled reaction after Pete Carroll decided to go for two despite leading 31-24 in the fourth quarter.

Bill Belichick says "Why would they go for two?" (h/t @WoodySchoh) https://t.co/jjbU3493sr

Further, despite whatever number of fans who might delight in the random or the unexpected, there still exists the notion that kickers aren’t real football players or even real men. The thinking goes, allowing a lowly kicker’s botched boot to decide the outcome is an insult to the mud- and blood-soaked noble warriors subjecting themselves to bodily harm and risking their future cognitive functioning in service to the great American game of football.

Nah. For all the ways in which the NFL tried to legislate away any and all fun, bury it beneath it’s Talmudic rulebook, or reduce players to easily-replaced, faceless dudes in branded uniforms, in this instance a least, they celebrated the weird. More of this, please.

The hero the NFL needs. https://t.co/cCHO6cIrB7