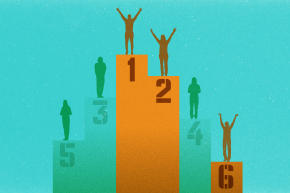 From Sixth To An Olympic Medalist, Eight Years Later
By Joe Lemire

From Sixth To An Olympic Medalist, Eight Years Later

The old thinking that fourth place was the “worst position to finish” and how the pain of the “cruelest fate of all” can “forever change an athlete” is losing its relevancy in this era of stringent—and even retroactive—drug testing.

“It’s kind of a running joke among at least our team,” U.S. women’s high jumper Chaunté Lowe said, “being like, ‘Man, you don’t have to get on the medal stand—just get close enough so that when the drug tests come back positive, you can get a medal.’”

This summer’s Olympics in Rio de Janeiro were the fourth for Lowe, 32, who failed to make the finals in 2004, and then finished sixth, sixth, and fourth in subsequent Games. The American record holder in both the indoor and outdoor high jumps never stood on a medal podium but now, eight years after the competition in Beijing, she is in line to receive a bronze after the third-, fourth-, and fifth-place finishers were subsequently disqualified after re-testing of their drug samples found banned substances.

Last Thursday had started ordinarily for Lowe, a mother of three who typically wakes before 5 a.m. because, in addition to her training, does day trading through TD Ameritrade and takes online classes at DeVry’s graduate school for her master’s in accounting and financial management and at Boston University to become a certified financial planner. In a spare quiet moment, she logged onto social media to find messages from 2008’s gold-medal high jumper Tia Hellebaut and seventh-turned-fourth place finisher Ariane Friedrich congratulating Lowe on her decade-delayed medal.

After her friends gave her a “Facebook medal ceremony,” Lowe said, she let out a roar of excitement.

“I don’t know if my neighbors thought I was being murdered or what,” she said. “I just screamed at the top of my lungs.”

So I find out today that I was supposed to be in this picture. Finally an Olympic Bronze medalist 8 years later.

The bronze medalist, Russian Anna Chicherova, actually lost her standing last month after the steroid turinabol was discovered in a re-test. The initial beneficiary was fellow Russian Elena Slesarenko, who had initially placed fourth, but she and fifth-place finisher, Ukrainian Vita Palamar, were both announced as disqualified on Thursday. (Chicherova and Slesarenko, incidentally, were the gold medalists in the event in 2004 and 2012—titles they still hold; Chicherova has also appealed her 2008 violation to the Court for Arbitration in Sport.)

“I have mixed emotions: extremely happy because now my entire Olympic journey, my story is completely re-written, and then at the same time I’m upset because, man, what if they had gotten caught then?” Lowe said.

Lowe’s best friend in sports at the time was Hellebaut and she later became close with silver medalist Blanka Vlasic. She was told that she actually jumped higher than Hellebaut at those games—in excited celebration of her pal’s victory, that is.

“I would have loved to be on the podium with my friends,” she said. “I think more about those moments, to be able to share in the joy with my friends, and I miss that. That hurts. That’s not ever going to come back.”

Attempting such revisionist history is the fair approach, of course, but there’s an inherent awkwardness attached to re-awarding of medals as part of the International Olympic Committee’s targeted re-testing. It’s not unlike revisiting the March Madness brackets from the years Memphis, Michigan, or UMass had those appearances vacated for NCAA violations—it’s hard to erase what happened.

At least Lowe will receive something tangible and tactile, and she’s already envisioning a medal ceremony of her own creation. She’d like her husband, Mario Lowe, to hand the medal to their youngest son, M.J., 3, who’d pass it to older sister, Aurora, 5, who’d give it their oldest child, Jasmine—who’s nine and was a nursing one-year-old at the time of Beijing Games—who’d place the medal around Lowe’s neck.

“I don’t care where it happens, I just want that moment and something they’ll be able to cherish,” Lowe said. “Let’s turn this into a positive: they would not have been able to do that eight years ago. Now they can share in that moment.”

Lowe said she is planning to compete in the 2018 world championships and maybe one or two other major meets but does not expect to still be jumping when Tokyo hosts the Games in 2020.

Then again, she said this moment was rejuvenating: “It kind of gave me new life, like, man, I’m a medallist. Maybe I should go and get another title somewhere. It fired me up.”

What it can’t do is replace the moment or the momentum of such an award. Before the Rio Games, the New York Times identified at least 54 occasions in which an athlete missed a podium moment, a number that has grown in recent months.

Lowe has spoken previously about how difficult 2008 was personally, when her husband was laid off and their home went into foreclosure. Extra or richer sponsorships would have helped at the time, and they may have been possible for a medalist. Dwight Phillips, the 2004 gold medalist in the long jump, is now the chairman of USA Track & Field’s Athlete Advisory Committee and suggested that the international governing body “should invest in a special insurance to protect athletes from missing out on financial gains.”

In Rio, Lowe was one of the final four jumpers remaining in the competition. They all had cleared 1.97 meters (nearly 6’6”), and the other three failed to jump 2.00 meters (a little more than 6’7”). Lowe was last in the jumping order and, because she had more accrued misses from earlier in the event, she would lose the tiebreaker, meaning she’d either win gold or not medal at all. She didn’t make it over the bar.

That experience was as close as it gets to a medal without winning one, yet it wasn’t how she eventually came about her bronze.

“You never think, like, sixth place—that was too far,” Lowe said. “You have to be at the worst fifth, but fourth is that golden-ticket spot. I never imagined that would happen with me placing so far off the podium.”

In the new era of drug testing, however, the proverbial podium is no longer a rigid structure but a malleable order, always subject to change.