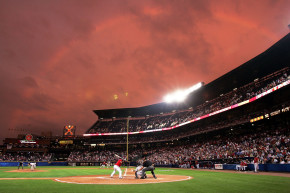 Sean Breslin has called Georgia’s Cobb County home for all of his 29 years, and with that regional citizenship came a devotion to baseball’s Atlanta Braves. Living northwest of downtown, however, often made the trip to Turner Field on the city’s south side prohibitive traffic wise.

Still, Breslin would make the trek to attend anywhere from “seven to 15” home games per year and was excited about the club’s planned relocation to SunTrust Park just three miles from the Marietta home he shares with his wife. The Braves boast “14 primary access points” to the stadium and a half-hour later start time, among other plans to ease the area’s notorious traffic congestion.

Even though the county was chipping in nearly $400 million, which precipitated a rise in Breslin’s property tax, he saw a corresponding rise in home value and was enjoying the benefits of new infrastructure. Another perk: his office—he’s an online editor at The Weather Channel—was a five-minute walk over an I-75 bridge to the game, meaning he wouldn’t even have to pay a premium for parking.

That driving and parking proximity carries an important, recently-developing proviso, however: “That’s prior to when we get kicked out,” he said.

Though Breslin said he had been “really, really excited to enjoy the final product of all the work that they’ve been doing” (he’s taken dozens of photos during construction), he won’t be around for much of it after learning from his Homeowners’ Association on Nov. 1 that the county was exercising its right of eminent domain on his home, and 30 others, to build the Windy Hill-Terrell Mill Connector. That project pre-dates the ballpark—a large mall nearby is another major draw—but will result in public acquisition of his home next summer so that road construction can begin in late 2019.

“If it wasn’t all so ironic, I would cry,” Breslin wrote on his blog.

Information supplied by the Cobb County Public Information Office makes clear that the connector was identified as a possible route as far back as 1994 and that a special-purpose local-option sales tax (SPLOST) to fund the project was approved by voters in 2014.

A map of the proposed site shows Bentley Road being extended southward through a row of townhomes on Turnberry Lane—where Breslin lives. The county said price assessments will be done at “fair market value, based on independent appraisals. All owners and tenants displaced by the project will receive relocation assistance in accordance with Federal and State law.” The problem, as Breslin noted, is what the valuation entails. A recent contracted sale in the neighborhood, which would have been for “considerably more” than prior sales, fell through when news of the connector was released.

“They’re not going to have any examples of what our house should be worth,” Breslin said, “because they’re going to cut out our neighborhood right before we have a chance to prove that they’re actually worth that.”

Worst of all, because of the skyrocketing property values in most of the county, Breslin and his wife are likely to move much farther north along I-75 to find another home they can afford. (As it happens, his office will be moving 10 minutes east of its current location as well.)

“I do not blame the Braves for this,” Breslin said, noting that he’ll remain a fan for as long as he lives. “This project was going to happen no matter what because there’s a huge mall right near the stadium.”

As Breslin wrote in his post, he’s disappointed not to be able to show his future children where he and his wife first lived or where they returned from the hospital.

Instead, he’ll only be able to drive over the building’s former foundation.

“I definitely think it’ll be a weird experience at first,” he told Vocativ in a follow-up email. “I’ll probably take that road very infrequently, not because of the emotional aspect of it, but because that road isn’t going to be a road I’ll need to use often. Perhaps that’s another frustrating aspect for me—this road is not needed, and it’s not going to help me get anywhere faster.”

It all feels like another aggressive move by Cobb officials—it should be noted, that the county chairman responsible for the deal, Tim Lee, lost his re-election bid last summer—who are bequeathing a huge tax bill to residents who never had the chance to vote on the proposition.

Even an initially excited constituent with roots in the area could be pushed out of the county.

“It’s really all I know,” Breslin said, “so hopefully I can stay here.”