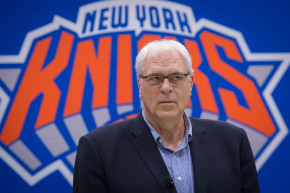 Phil Jackson, you see, has always fancied himself as not just a basketball coach (and a very successful one!) but a downright guru. He’s a leader of men and a shaper of young minds, armed with a vast wealth of philosophical and religious teachings, all of which he deployed to win a whole bunch of glittery rings. You can read about this in book after book written by Phil Jackson in which he explains how he, Phil Jackson, did exactly that.

Speaking of literature, for years Jackson has doled out a specific, hand-picked book to each player on his roster, with the clear implication that delving into his selected reading material would lead to better results on the court, even if the subject matter didn’t have anything to do with hoops at all or seemed a jejune choice. (Adam Morrison was once given a graphic novel about Che Guevara, for some reason.) Since taking over as president of the New York Knicks, he’s kept this tradition going, though he’s downsized to a single book that everyone was expected to hunker down and study.

This year’s entry in Phil’s Book Club is a handy little volume called “Mindfulness on the Go.” Per the New York Daily News, the book provides:

25 meditation exercises meant to be easily incorporated in everyday life.

Examples of the exercises include: the three-breath practice, the mindfulness of entering rooms, offering compliments, tasting your food one careful bite at a time, using your non-dominant hand for everyday tasks and placing awareness in the bottom of your feet.

That’s nice. It sounds very relaxing and no matter how much you might sneer at gauzy self-help stuff, none of the above is what you’d call a bad idea. We only have a brief time on this spinning, fragile globe, so taking a breath or being kind is definitely worthwhile regardless of whether or not you play basketball for a living. It also dovetails nicely with the mindfulness exercises the Knicks have partaken in ever since Jackson got the gig. One minor hiccup in this best-laid plan of mice and Zen: it seems as if no one’s doing the homework.

“Most of the players asked about the book by the Daily News acknowledged they haven’t read it beyond a short excerpt Jackson went over during one of his mindfulness sessions,” the Daily News reported.

Good for the Knicks. To clarify, here at False Start, we are very much in favor of reading books and getting exposed to new ideas, language, and writers. You’re reading something right now and we thank you for it! But Jackson’s lit stunt has always been just that: yet another way to point back to his own brilliance, erudition, and belief that basketball can be both a sport to be mastered and a spiritual inquiry (which it can!), otherwise Jackson wouldn’t showily let it be known exactly which leather-bound tomes he’d selected from his personal library.

And that’s when he’s just flattering himself. In 2010, Kobe Bryant was given a copy of the novel “Montana, 1948.” Why that book above all others, Phil? “It was about the part of the country I grew up in, so it’s something special for me to give it to him,” Jackson said.

Technically, that statement is true. However, Jackson failed to divulge the plot of “Montana, 1948,” which concerns a beloved local doctor who has spent years sexually assaulting a Native American woman who works for him. When she finally tells the doctor’s family about his crimes, he kills her. Parts of the doctor’s family do everything in their power to ensure that he isn’t punished, and when things take a turn for the worse, the doctor kills himself.

I MEAN COME ON. Giving that book to Kobe Bryant?  Regardless of where you stand vis-à-vis Kobe Bryant and what happened in a Denver hotel room in 2003, it’s pretty clear what Jackson is saying, and he’s doing so in a very public way.

Anyway, at least one Knick was willing to suck up to the teacher and you’ll be shocked to learn it’s Marshall Plumlee, Duke alum. He breathlessly praised “Mindfulness on the Go,” telling the Daily News that he schleps the book around with him in his bag. Of course.