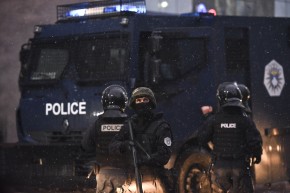 Nineteen individuals suspected of plotting a series of synchronous terrorist attacks in the Balkans, one of which would have taken place during a World Cup qualifying match between Israel and Albania, have been arrested in Kosovo.

“They were planning to commit terrorist attacks in Kosovo and also [an attack] against [the] Israeli football team and their fans during the Albania-Israel match,” the Kosovo police said in a statement released online. Officials declined to provide further detail about the nature and location of the alleged, potential multiple strikes and they only describe the individual alleged to be directing and instructing the ISIS-affiliated cell as “terrorist LM.” But according to multiple reports, the LM in question is Lavdrim Muhaxheri, an Islamic State leader and recruiter born in Kosovo who calls himself the “commander of Albanians in Syria and Iraq.”

Working in conjunction with the Kosovo Intelligence agency, the police also seized explosives, both a semi-automatic and a hunting rifle, 719 bullets, communications devices, a drone, and “religious literature from authors notorious for their extremist ideology.” Of the 19 suspects, 18 were Kosovan citizens and one hailed from Macedonia. One suspect has already been released, but the remainder will remain in custody for 30 days as the investigation continues.

On October 8, concerns over a possible terrorist incident prompted FIFA, the Albanian Football Federation, and the Israeli Football Federation to agree to move Saturday’s match between Israel and Albania to Elbasan, a city closer to the capital possessing a larger security force, from the scheduled venue in Shkoder. Israel defeated Albania 3-0, in a game marked by a significant police presence, and Israeli nationals were advised not to attend by the Israeli military, due to a “significant threat of attacks being carried out in the area.” The travel warning was lifted on November 12.

According to the New York Times, extremism in the Muslim-majority nation of Kosovo has seen a stark uptick in the last decade, largely due to the influx of funds from Saudi Arabia, as part of a “deliberate, long-term strategy… to reshape Islam in its image, not only in Kosovo but around the world,” the Times wrote.

“Over the last two years, the police have identified 314 Kosovars — including two suicide bombers, 44 women and 28 children — who have gone abroad to join the Islamic State, the highest number per capita in Europe.”