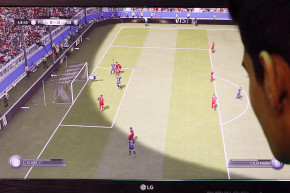 Electronic Arts’ annual games includes a FIFA Ultimate Team mode that allows users to build their own team using FIFA Coins, which they can buy and earn through play.

This market had grown so lucrative that four men reverse-engineered the game to “fraudulently instruct the servers, belonging to EA, into believing thousands of FIFA matches had been completed in the company’s FIFA video game within a matter of seconds,” according to court documents. Those coins could then be sold for real currency to black-market dealers.

This scheme, which lasted from 2013 to 2015, was so successful that the men hauled in more than $16 million before an investigation by the FBI and Internal Revenue Service Criminal Investigation caught them. Three co-conspirators—Nick Castellucci, 24, of, New Jersey; Ricky Miller, 24, of Arlington, Texas; and Eaton Zveare, 24, of Lancaster, Virginia—all pleaded guilty while the fourth, Anthony Clark, 24, of Whittier, California, was convicted on Wednesday following a three-day trial. The four men await sentencing.

An unsealed indictment outlined the process by which the men created the “FIFA Server Tool Application” to simulate thousands of matches within seconds and later circumvent “multiple security mechanisms” and expand the operation, using cloud computers to increase the volume of fictitious matches. Among the assets seized by authorities included $2,887,362.38 in a Bank of America account belonging to Clark, as well as a 2015 Audi A3 and 2014 Ford Explorer found at his home.

Among the court files is a search warrant whose probable cause includes testimony from Austin Alcala, a hacker who pleaded guilty to computer fraud and copyright infringement in a separate case. Alcala, who cooperated with the FBI as part of a plea deal, had collaborated with these four men—who called themselves the RANE Group, an acronym for their first names—and said Clark “provided leadership for the group.”

The warrant said these video-game hackers obtained a pirated copy of FIFA’s source code, which enabled their scheme. That court document indicated that one “mule account” went from zero FIFA coins to 2 million in just 15 minutes, thanks to 15 “farming accounts” all sharing points, and later a Google chat is quoted with the boast of the program making “67 million coins in under an hour.” The max anyone can earn in any one normal game—each lasts approximately 14 minutes—is 500 coins.

A cursory Internet search shows just how many of these third-party sellers have proliferated—there’s FifaCoin.com, FifaUltimateTeamCoins.com, BuyFifaCoins.com, FifaCoinsFC.com, FifaCoinsZone.net, and even Coins4Mom.com. FifaCoin.com, for instance, touts its site as the place to “buy safe and cheap FIFA 17 coins”; a listing for the Xbox360 version of the game offers 10,000 coins for $2.79 and 1 million for $267.99.