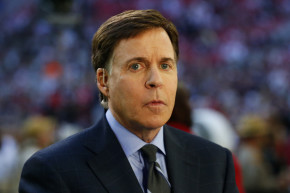 Bob Costas Has A Terrible Idea For Dealing With Protests

It's really bad and dumb

So, what’s Bob Costas’ terrible idea? Bob thinks the first amendment was and remains a wonderful addition to the constitution, but maybe the rights that are outlined in it shouldn’t be exercised in front of football fans that don’t like it, particularly not during the national anthem, because he fears that the emotional backlash has muddled the message of the protests.

Fear not, he has a solution to this quandry. If the great Costas plan were to be enacted, no protests would take place on the field. Instead, players would remain safely tucked away in the locker room while someone belts out “The Star-Spangled Banner.” In exchange, the NFL would provide an “organized forum,” with members of the press at hand that would take place on “Tuesday or Wednesday.” There, anyone that wanted to give full flower to their political manifesto could do so at length.

“It would actually enhance what anyone who had a point to make was attempting to say,” Costas told the Sporting News.

Ah ha! It’s not really a “compromise,” as much as it is shunting the protesters into a rubber room like a disgraced public school teacher. There’s no way to know if Bob’s clued in to the current state of our national discourse, but the fans screaming obscenities and leveling death threats are not doing so because they’ve yet to receive a more nuanced explanation. They want them to shut the hell up. End stop.

Bob also seems to have forgotten that the sporting press spends a great deal of time interacting with NFL players of all stripes without creating a specially designated space where these conversations or “interviews” could take place. Also, should someone desire to learn exactly why Colin Kaepernick and others have taken a knee and/or raised a fist, the information is readily available, and Kaepernick in particular has expounded on the subject ad nauseam.

The Sporting News thinks this is a boffo idea, however. “This would give protesting players time to prepare and organize their thoughts. Then present them in a setting where there’s no football questions to interfere,” [sic] they wrote. And while they noted that ratings have rebounded in the last week and there are multiple reasons for the decline in viewers beyond anti-Kaepernick sentiments, this would be throwing a bone to that gang. “The NFL, meanwhile, will finally be seen as being proactive on this issue. Many #BoycottNFLers believe the league is complicit in the player protests. Time for the league to get off the bench and do something.”

This may be news to Bob and the Sporting News, but a protest, if it is to have any impact at all, will cause some discomfort and make some people spitting mad. The individuals expressing dissent do so with the full knowledge that there may be repercussions. And though the NFL hasn’t cracked down on the protests, they know that they may receive criticism, and are subjecting themselves to potential financial losses, whether via an unstated blackballing, the loss of endorsements, or what have you.

Those that protest are taking this risk because they feel that the juice is worth any current and yet-unknown squeeze. Some may cave, like Tampa Bay Buccanneers wide receiver Mike Evans, whose Trump-based protest lasted for one game.

Bob Costas is employed by NBC Sports. He’ll be handling the pregame show for the Thursday night games starting this week on, you guessed it, NBC. He can tell the Sporting News that he applauds Kaepernick’s actions and that the issues he’s raised, but his solution isn’t a solution; it’s a way to make a “problem” for a corporate partner go away.