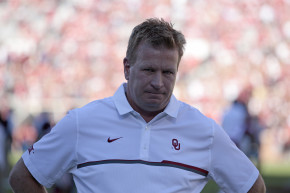 Sooners Coach Dumps On Player For Being Smart
By Jeff Andrews

Sooners Coach Dumps On Player For Being Smart

The Oklahoma Sooners announced Tuesday that defensive tackle Charles Walker has left the team to focus on preparation for the NFL Draft. Scouts Inc. lists Walker as the No. 21-ranked prospect in college football, but the redshirt junior hasn’t played since Oct. 1 when he suffered a concussion, the second diagnosed concussion of his college career.

So Walker made a calculated decision. He could either bang his head against ranked teams for three more games and risk suffering another concussion that might hurt his draft stock, or he could play it safe and sit out the rest of the year to ensure he’s healthy for a draft process that could render him a multi-millionaire.

That he chose the latter seems not just reasonable, but smart, especially given that Walker is a parent, or at least he appears to be, judging by a cryptic tweet he sent on Monday. But not so, says Oklahoma assistant coach Mike Stoops, who took to college football’s equivalent of the bully pulpit to unload on Walker and his decision.

“Quitting on your teammates is hard to take, as a coach,” Stoops told The Dallas Morning News. “You can’t have guys coming and going and have a group of players committed to what they’re doing day in and day out, putting all the time and energy into it. It’s not fair to the players that are on our team if they’re not committed to the team.”

That a man making $900,000 to teach unpaid black youths how to smash into each other is complaining about fairness when one of those unpaid black youths decides not to smash anymore in hopes of making a better life for his family is a master class in chutzpah, especially when said man is in line for a more than $100,000 bonus that’s presumably awarded at least in part on the basis of how the team performs in the next three games.

But such is life on the plantation that is college football, where black labor must pledge militaristic loyalty to the team, but the team is free to dump recruits if a better one comes along, cut scholarships if a player is no longer serviceable, and continually risk the long-term health of players, to the sole monetary benefit of “the team” that is white capital.

Adult college football coaches regularly weaponize hollow cliches about “commitment to the team” when a teenager makes a decision about what’s best for his life that doesn’t allow the coach to continue exploiting the teenager. Earlier this year, Alabama coach Nick Saban, whose ruthless disregard for players has made him a millionaire many times over again, blasted quarterback Blake Barnett for transferring after he lost the starting job to Jalen Hurts.

“There’s certain things that I was taught growing up about not quitting and seeing things through,” Saban lectured at the time. “I think if I would have come home and told my dad that I was going to quit the team, I think he would have kicked me out of the house. I don’t think I’d have a place to stay.”

Barnett chose to seek out that opportunity. It’s almost naive of Saban to think a teenager would rather be his safety blanket than realize his own potential, but then again, Saban’s perception of the matter was thoroughly reinforced by sports media, with ESPN analyst Danny Kanell leading the way.

“At some point in your life you’re going to have to step up and compete for a job,” Kanell said of the teenager on ESPN’s nationally syndicated Mike & Mike radio show. “Show me a franchise quarterback in the NFL who quit on his team and transferred midseason, apart from [three-time Super Bowl champion and first-ballot Hall of Famer] Troy Aikman.”

With all the cheap shots these guys take against college football players, it’s hard to tell who’s the adult and who’s the kid.